Any time Sonic and Knuckles are sharing screen time in an Ian Flynn story, it’s a recipe for some great banter, with two big personalities that compete and clash really well. Unlike the last two issues, however, the action here isn’t simply a background for the reader to get to know the interactions between two characters. We get two new villains here, the first new characters in IDW’s Sonic canon, and honestly I fell in love with them immediately. Our introduction to Rough and Tumble is paced really well—Sonic and Knuckles find a town under attack, clear it out of Badniks, and find a populace in fear of retribution from two “mercenaries.” 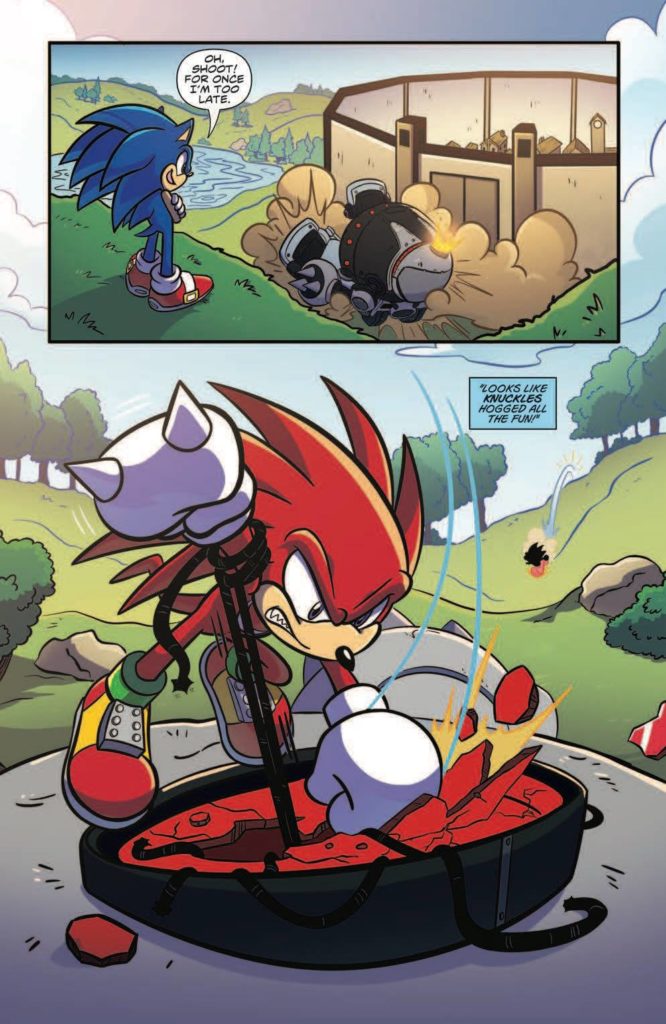 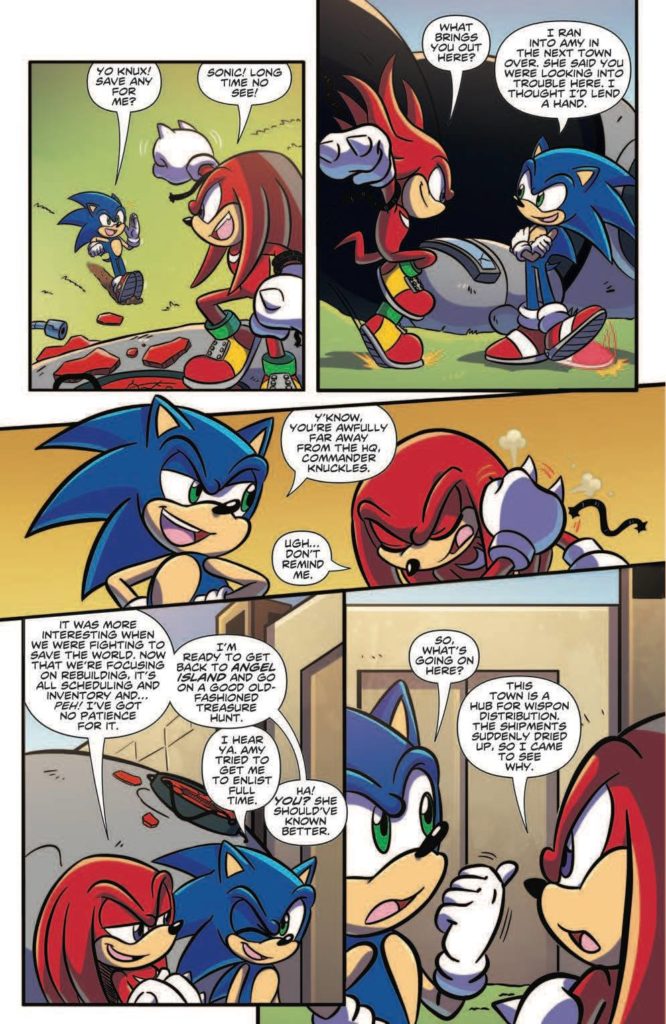 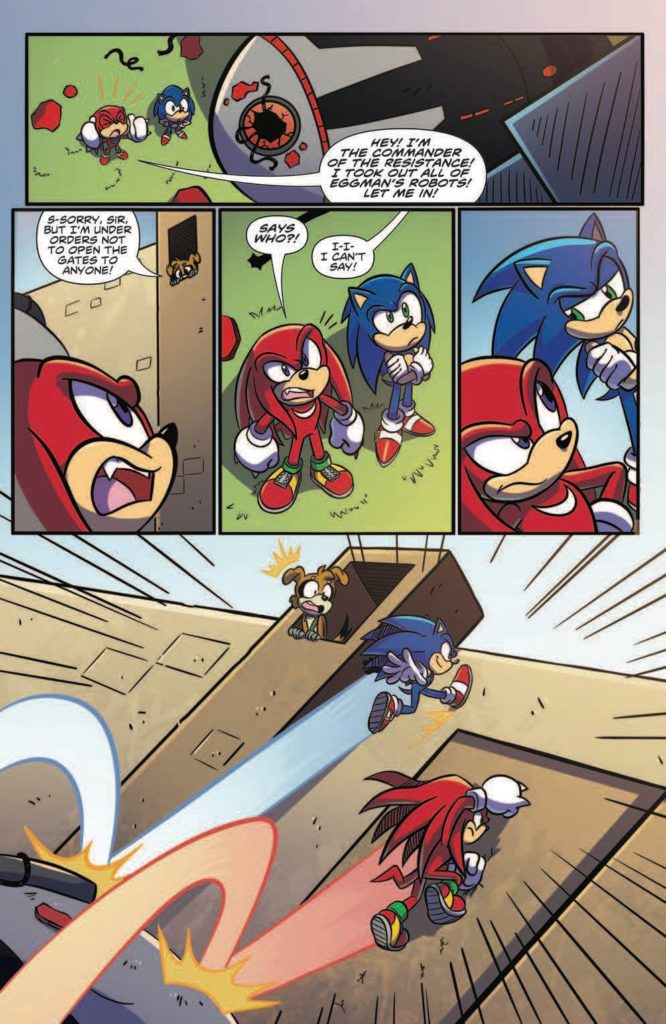 Rough and Tumble have hoarded Wispons in a warehouse and are keeping the spoils of war to themselves while ordering the citizenry to keep them comfortable. They introduce themselves with a Team Rocket-esque jingle and try their best to beat up Sonic and Knuckles, but are ultimately bested. I think these characters work super well together; they’re reminiscent of the Shattered World Crisis’s Egg Bosses in all the right ways. I really appreciate that Rough actually employs his abilities as a skunk here, too, revving up into a stink bomb spin dash that leads to some really incredible reactions from our heroes.

Going back to the Wispons really quick, this issue all but confirms this is a Forces continuation story. Dropping Wispons by name, alluding to Sonic’s capture and Tails’s “going solo,” and actually opting to explain why the heck the Wisps are in Forces in the first place. As you’d expect from Flynn, by latching onto an existing game he’s able to not only build out the universe into something real and tangible, but try to draw a timeline that our characters can tap into and reference. Sonic freely refers to the events of Sonic Colors and Sonic Lost World here, filling in the reader with some snappy exposition-filled banter. Knuckles explains that Tails, before he left to pal around with Classic Sonic, helped The Resistance communicate with the Wisps, who volunteered to pop into capsules and power the Wispons needed to defeat Eggman. The Wisps are given character and life and emotion here, just as they were in Colors; Sonic sees that they’re scared of Rough and Tumble, reminds them who he is with quick references to the events of Colors and the Lost Hex, and asks for their assistance. The interactions with the Wisps remind me of their brief appearance in the Shadow Fall arc, though it makes me a bit sad that we never got to see Flynn tackle the Lost Hex arc he kept alluding to at the end of the Shattered World Crisis. 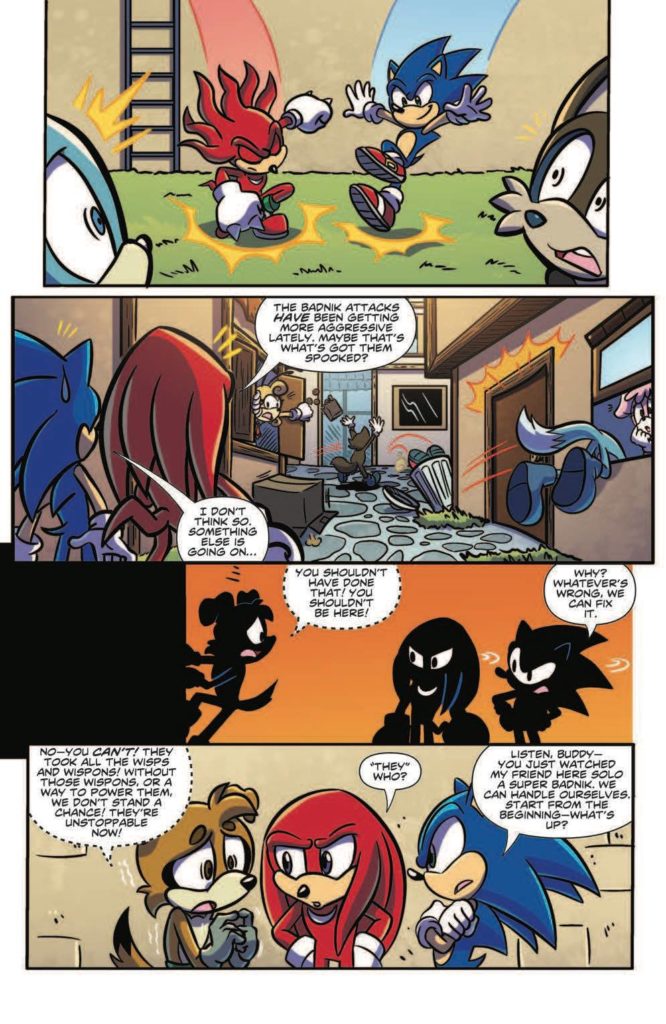 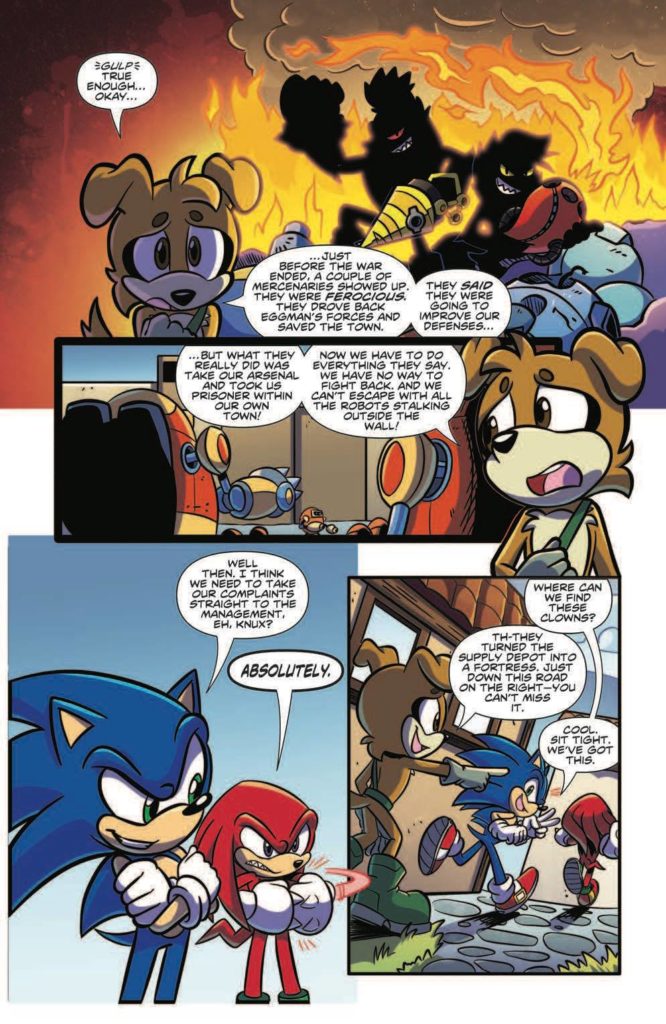 In any event, it’s gratifying to see Flynn continue to return to the idea that Sonic deserves a history and a timeline. It makes the world feel bigger and the character feel more special. Admittedly there’s that worry that referencing games left and right might put off newer readers, but at the same time, the game stories being referenced here are far more accessible than the 250+ issues of backstory readers were daunted with before, and again, *most new readers* are going to have some sort of base familiarity with Sonic the Hedgehog.

Moving to the art, this issue features pencils by returning artist Jennifer Hernandez and colors by new artist Heather Breckel. I’ve been a fan of Hernandez’s Sonic work for a while. Her art is really dynamic, cartoony, and full of character in a way that’s similar to Tracy Yardley’s. The expressions in this issue speak for themselves, with faces that are cute, funny, emotive, and full of life. As in issue 2, this issue is full of colorful background characters that make this world feel full and lived in. Speaking of colorful, the colors in this issue are utterly gorgeous. Breckel’s colors here are vivid and bright, easily rivaling the veteran work we saw from Matt Herms in issue 1, and I’m stoked to see her continue to work on this book. Like cover artist Natalie Fourdraine, who once again delivers a stunning cover variant for issue 3, Breckel is an exciting example of the kind of new talent IDW is pulling in. As before, we’ve got a pile of variants for this; Fourdraine brings us one, along with covers by Hernandez, Tyson Hesse, and returning artist Jamal Peppers. 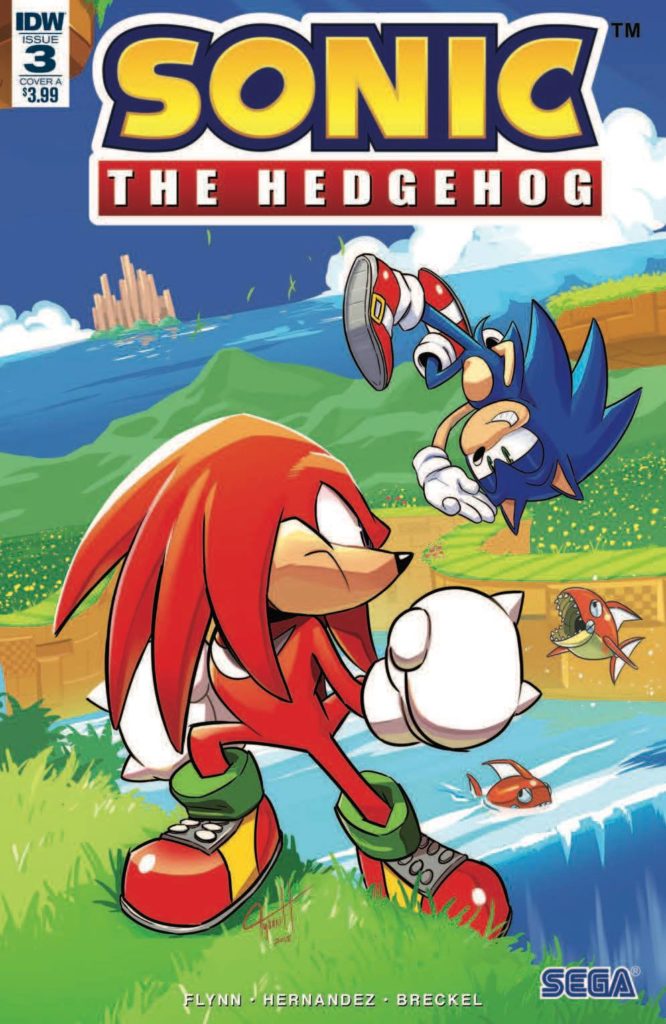 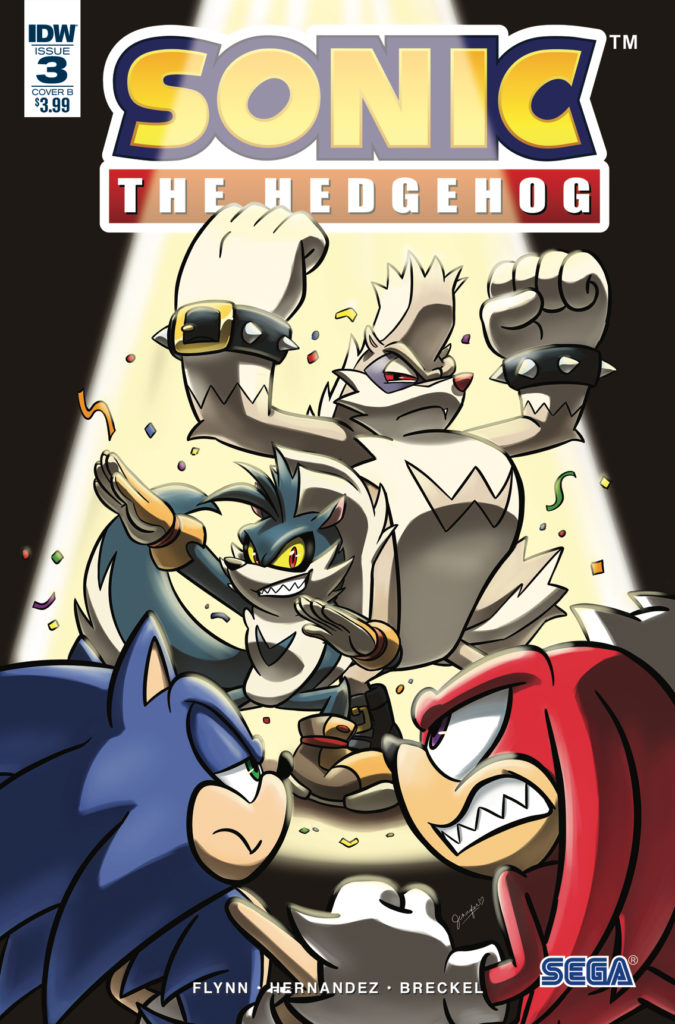 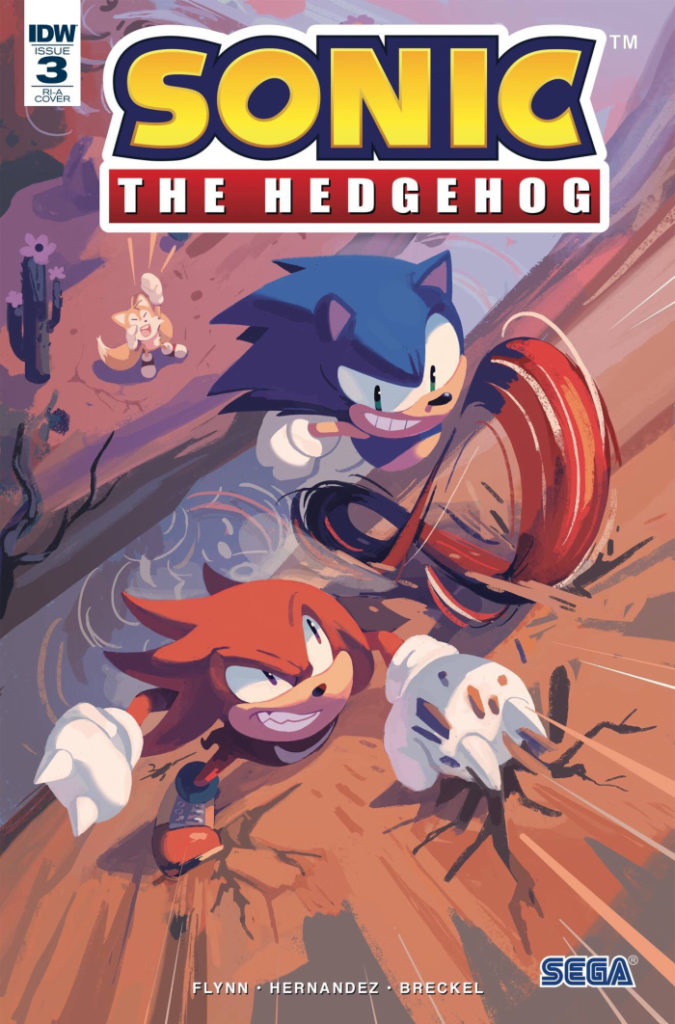 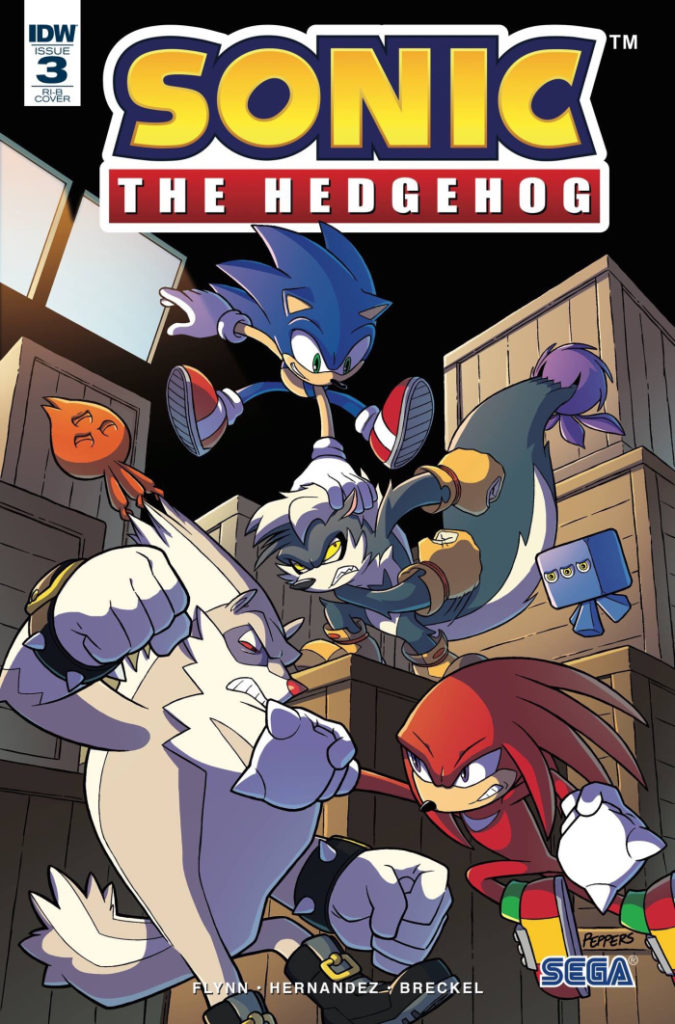 By introducing two fun new villains and breaking into a frank discussion about lore, this issue’s given us a much better look at what IDW’s take on Sonic is going to feel like going forward. Rough & Tumble are just another example of how creative this team can be when pressed, quickly developing memorable characters with striking designs. Next week’s issue will surely only build on this foundation; Blaze’s return gives Flynn yet another opportunity to build out this world’s connective lore, and Tangle gives us another promising new character to meet. I’m certainly curious to see who’s really pulling the strings on these attacks as well; we know Eggman and Shadow appear in issue 5, but judging by the solicitations for issue 7, I’ve got a feeling this arc is a little deeper than it appears. Unfortunately, next week is our last issue before the comic moves to a monthly schedule. At least we’ll have a while to digest the first four books before the arc continues.