The year is 2000. As North America settled into the new millennium, SEGA threw Dreamcast owners a curveball with Space Channel 5, one of the most unique and standout titles in the console’s library. Players took control of Ulala, an intergalactic news reporter who fights off a horde of alien kidnappers by busting moves and freeing hostages. The franchise has been dormant for many years, but thanks to development studio Grounding Inc., Ulala is back and dancing again in Space Channel 5 VR: Kinda Funky News Flash, which is a very wordy title we will never use again.

In short, Space Channel 5 VR is essentially the final form of the dance-based gameplay you remember. After a brief tutorial where you learn the ropes with Ulala, you are dropped into the pristine white spaceport from the original game, and it’s time to fight the Morolians again. With a PlayStation Move controller in each hand, you physically move up, down, left, and right alongside Ulala and the aliens to perform the dance moves they shout out. Famous moves like the “Chu” attack also receive dedicated motion control, so this really is the ultimate evolution of this style of gameplay. 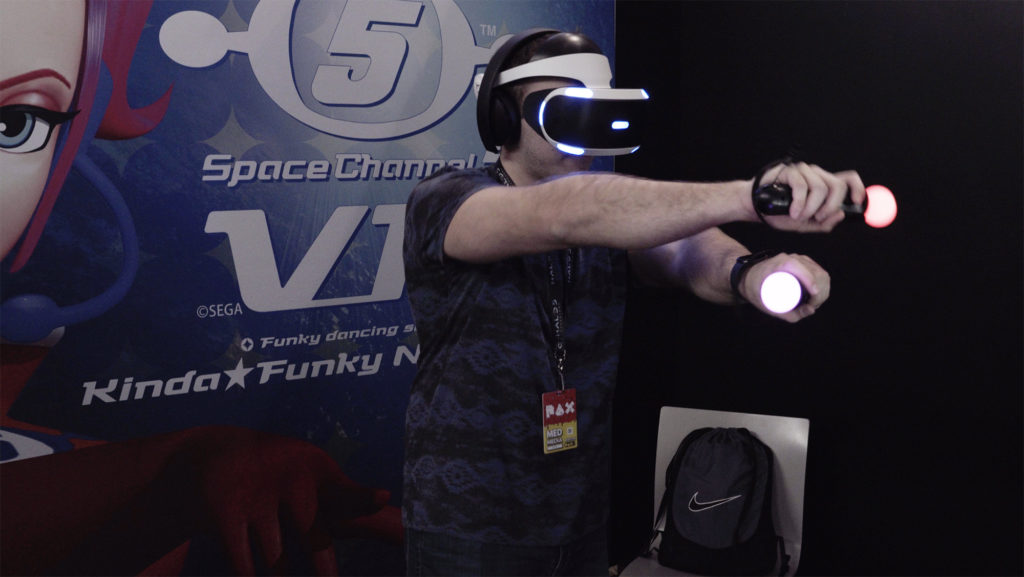 Can you believe this dancing machine only scored 90%?!

In many ways, the VR environment is the perfect way to experience a rhythm game like Space Channel 5, and this platform is a great fit for the franchise. The first-person perspective drops you directly into the world of the game, so you’re not a god-like figure watching down on Ulala as she defeats the aliens; you’re the one actually throwing the “Chu” attacks, and it’s surprisingly satisfying. As with other games in this genre, it’s also pretty fun to actually move along with the funky soundtrack and use your body as the controller. Admittedly, though, the concept of an interstellar reporter defeating alien hordes with her sick dance moves is still a pretty bizarre one, so if the idea didn’t appeal to you twenty years ago, it certainly won’t now that you have to actually dance along with the game.

That said, for those of you who do want to get up and dance when playing Space Channel 5, this game basically exists explicitly for you. With a more polished presentation and all the advantages of VR, it’s easier than ever to get wrapped up in the quirky and utterly bizarre world of this franchise. People with fond memories of the Space Channel 5 games should love this one, and casual players willing to jump into the weirdness might find something cool in here, too.

Space Channel 5 VR will be released on PlayStation VR and HTC Vive. The game is only 40% complete according to its developers, so its release is likely not coming soon.

Sega Opts Out of Gamescom 2012