So that trailer, eh?

In regards to its actual content, I can’t really write anything here that you haven’t already seen/heard three hundred times from your Twitter timeline, classroom, or office (i.e. Sonic looks terrible, why does he have human teeth, lol it’s 90’s Jim Carrey)

To be honest, I’ve kinda had this movie pinned down from the start. Over a year ago, I published “I Am Terrified of The Sonic Movie” and pretty much nailed it. Unfortunately, nothing about the trailer surprised me. This is the part where I distastefully brag about how I was “right all along, you plebes.”

However, something happened today…

Thank you for the support. And the criticism. The message is loud and clear… you aren't happy with the design & you want changes. It's going to happen. Everyone at Paramount & Sega are fully committed to making this character the BEST he can be… #sonicmovie #gottafixfast 🔧✌️

For the first time since this movie’s announcement, I’m actually not certain about what will happen. Fowler just opened a pandora’s box of new doubts and questions.

The movie is set to release in November. That’s not much time to re-animate the film’s titular character. If they maintain this date, we surely can’t expect that significant of a change, can we? If they just changed his teeth and nothing else, that alone is worthy of a delay.

I think it’s paramount *cough* that the studio push the date. Otherwise, I can’t see how it’d be enough time to make changes, or enough of a change to be worthwhile. And if I’m being practical, we shouldn’t expect a major design overhaul, even with a delay. Animation is not light work.

From the words of tweets and interviews, I get the vibe that Fowler cares deeply about our beloved hedgehog. But his actions show otherwise. If he couldn’t see how terrible this design is, I’m not sure his passion can be trusted with much confidence (maybe he is lacking enough creative clout to enforce that passion?). I mean, we aren’t talking about some deep-cut nitpick here. We are talking about the design of a 25 year old character whose appeal rests a great deal on the shoulders of said iconic design. If there’s anything a “Sonic fan” should have no trouble judging, it’s the design.

Shoot, social media is full of fan-made alternative designs right now. Fans are photoshopping stills from the trailer with their own version of “how Sonic should’ve looked.” It’s telling just how different one of these fan-made designs is from the other, and yet every one of them still looks better than what we got.  It’s not like this response is surprising, either. Fan artists were already editing Sonic’s movie appearance when design docs leaked months earlier. 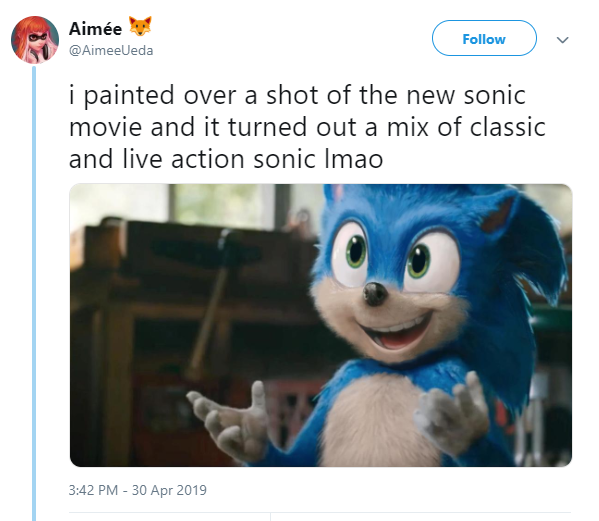 A wonderful, fan-proposed improvement by illustrator Aimee Ueda. Unfortunately, I don’t think we’ll be getting a design change this significant.

Which makes me think it’s worth noting how quick Fowler was to respond. And on his personal twitter, no less. No spokesperson or press statement, but a tweet. If that tweet is to be believed, that tweets costs millions of dollars. The tension must have been building prior to the trailer’s publication. Note the fact that he brings up Sega. The parent company and IP holder of Sonic has mostly remained silent about the movie until now. You can almost hear Sega’s angry concern behind Fowler’s words.

This whole thing might seem like deja-vu to Paramount. The 2017 children’s comedy, Monster Trucks, had a test screening that was so bad, kids ran out of the theater screaming and crying. The design of the titular monster was so horrifying that the film was delayed multiples times in order to dial down the nightmare fuel in favor of a more cute and cartoony creature. The film unfortunately turned out to be a box office flop, making only $64.5 million against a $125 budget.

Paramount must be banking on the brand-recognition of Sonic. Perhaps the most tragic thing about Monster Trucks is the fact that it is one of the few recent Hollywood films with a distinctly new and unique idea, as opposed to another reboot, remake, or adaptation. The delay didn’t work out for Monster Trucks. Maybe that’s because Monster Trucks didn’t have 25 years worth of games, comics, and bed sheet sets on its side. Paramount is also likely to be well aware of the meme-factor. The “this looks terrible but I’m going day-one” factor that helped The Emoji Movie be a financial success despite being a critical disaster.

So from Paramount’s perspective, the design fix may be worth the price. The Sonic name will put people in theater seats, both ironically and unironically, so why not make it actually good in hopes that the numbers increase? Paramount is currently in a tough spot, so it’s certainly a risk.

…And listen Paramount, I know you’re not reading this, but for crying out loud, giving Sonic a mono-eye or cartoony gloves isn’t going to break our immersion. We are watching a movie about a talking blue hedgehog that can break the sound barrier. We are quite capable of suspending our disbelief. Just give us the design we want and stop making up reasons why it wouldn’t work.

Reasonable Assessment is commentary series written by Noah Copeland, a somewhat interesting human. Noah makes music, games, and films, and stands at exactly average height. You can follow him on Twitter @NoahNCopeland