Here’s what we know.

If you read my review, it’s obvious I think Team Sonic Racing is a little rough around the edges. I spend a lot of that review pointing out the negatives, because those are easiest to talk about, but at its core I think there’s a fun game in there, you just have to put up with a lot of little problems. A lot of them are small enough that the game could probably be cleaned up significantly by simply patching in better quality-of-life fixes.

Which is how I’m going to segue in to saying that the Playstation 4 version of Team Sonic Racing received its first patch today. Details are scarce right now on what exactly this patch does — Sumo Digital hasn’t really provided patch notes that I’ve been able to find, but according to users of the ResetEra gaming forum, the patch is aimed at stabilizing the online experience.

A few small fixes are included with this, however. For example, on the Dualshock 4 controller, the X button is now the default button for watching cutscenes in the Team Adventure story mode, with the Square button being used to skip cutscenes. Previously, these two buttons were swapped, leading to the default option being to skip all of the cutscenes in story mode. 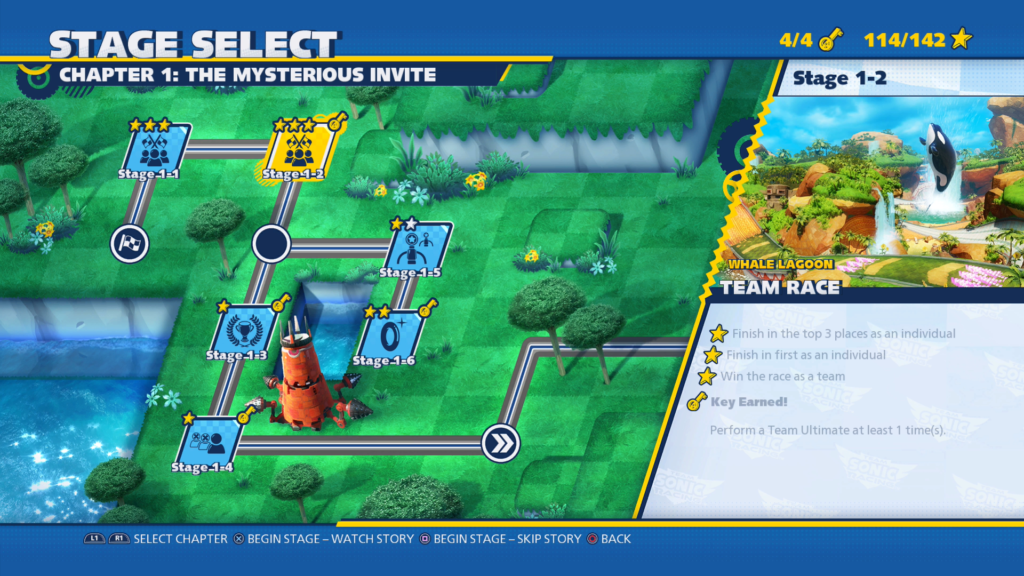 As it should be.

Some users are also suggesting difficulty balancing has been improved. Before the patch, some users were saying the game was bugged — higher difficulties in the Team Adventure story mode were way harder than playing Grand Prixes at Hard and Expert difficulty. According to ResetEra user Zonic, Team Adventure may have seen tweaks to reduce difficulty of races in later chapters, but one should also keep in mind the subjective nature of difficulty balancing in games, and the chaotic nature of kart racers in general. Without Sumo Digital confirming this one, I say take it with a grain of salt.

Unfortunately, a slew of other bugs have yet to be fixed. Some users are still reporting sound issues, particularly during online matches, and Team Sonic Racing’s Final Fortress tracks are still not included in the Grand Prix selection. There’s also the issue of a graphical bug encountered during the “Thunder Road” track — a giant black sphere appears where part of the sky seems to be getting culled out of view. This black sphere does not appear in some of the other versions of the game.

Currently, this patch is only for the Playstation 4 version of Team Sonic Racing, but similar patches may be on their way for the Xbox One, Steam, and Switch versions of the game. Stay tuned for more as it develops.

Iizuka On Sonic Twitch Stream: “Sonic Mania Will Have More Classic Levels Than New Ones”