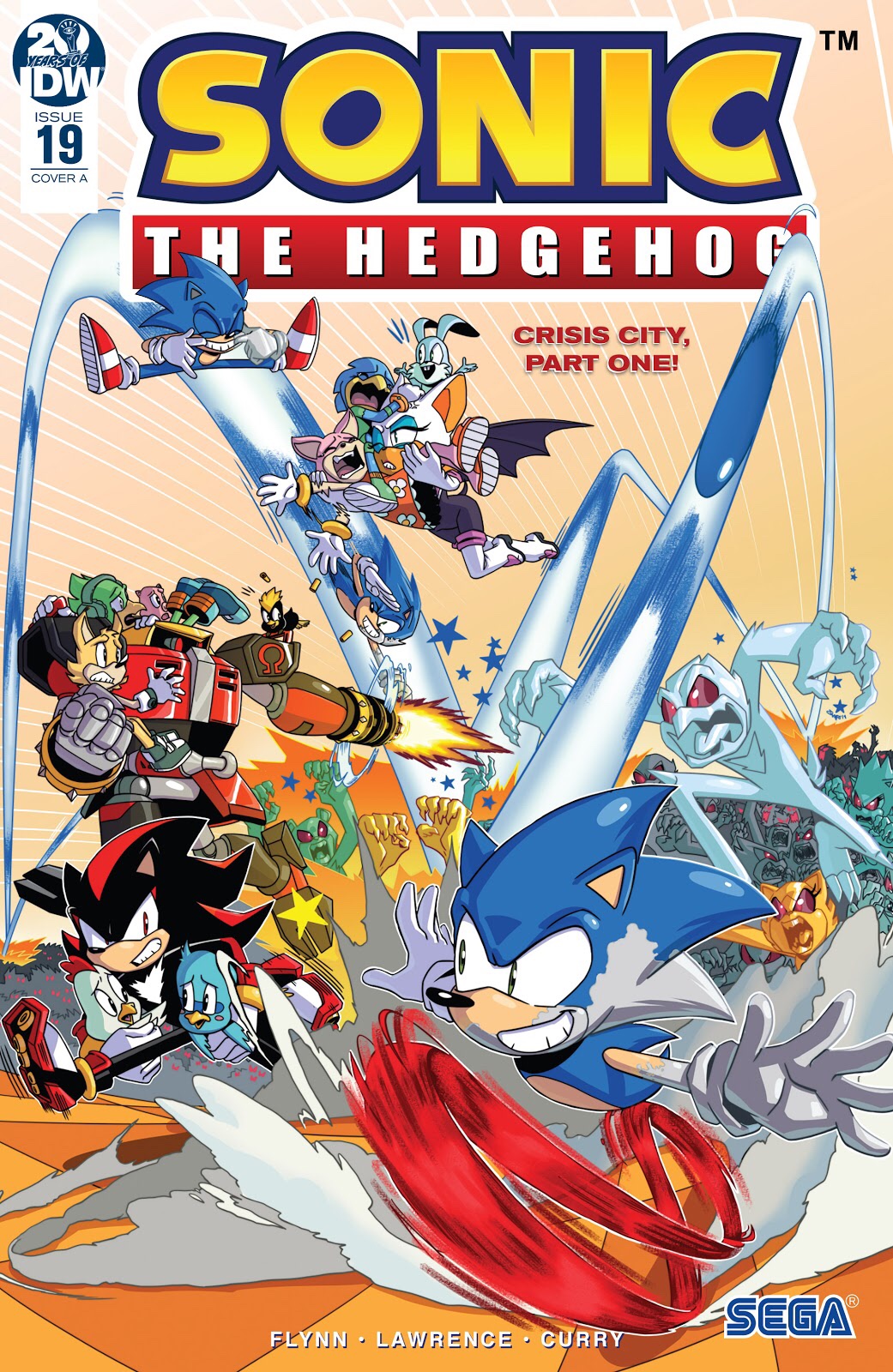 This is the official Spoiler Alert, if you don’t want this issue spoiled, avert your eyes now. It’s a doozy.

I called it and I am upset. Okay not really, because I knew what was going to happen. It was predictable at the least, and spoiled for some, (myself included), when the cover art for Issue 20 released a few weeks ago. But I’m getting ahead of myself already. Let’s recap this issue, shall we?

Issue 19 starts off with Rouge explaining Sunset City and it’s history as the go-to for jewels and jewelry. After being devastated by the events of Sonic Forces, the city rebuilt, but now finds itself under siege by Eggman’s rogue Zombots.

Sonic comes to the rescue of the town, though it quickly becomes apparent that his own infection is close to becoming unmanageable, even with his ability to run the virus off. Sonic saves some citizens from what appeared to me as an apartment complex with the help of Omega, and they’re sent to the Grand Gold Flicky Hotel where Rouge set up a safe zone. Sonic sends the citizens there.

The hotel is also under attack from hordes of Zombots. Sonic fights them off, and Shadow brings a massive semi truck to use to evacuate the citizens taking shelter in the hotel. Shadow appears to blame Sonic for the Zombot invasion, telling Sonic that had he just let Shadow take our Eggman when he was known as Mr. Tinker, they wouldn’t be in this mess currently. 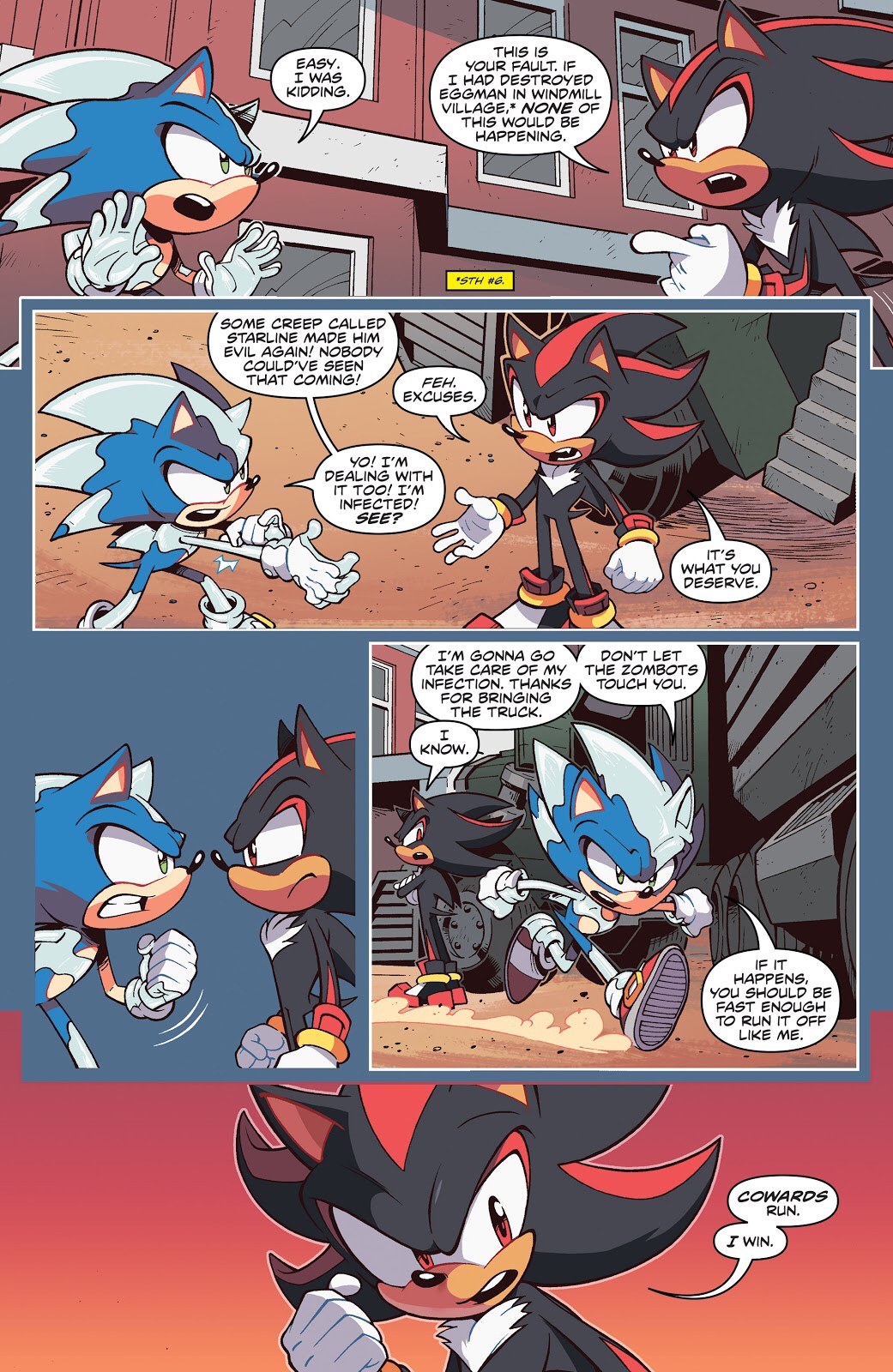 Sonic explicitly warns Shadow not to let the Zombots touch him or he will catch the infection, but tells him that if he does get touched, he should be fast enough to run it off like Sonic does. Shadow, doing what Shadow does, brushes off Sonic’s warning. Sonic then runs off to take care of his virus before it spreads anymore than it has, and Shadow, Rouge, and Omega work to help get the refugees into the truck. Omega guards the truck, Rouge gets the refugees inside, and Shadow fights the Zombots.

While Rouge is helping get the refugees onto the truck, she catches sight of Shadow fighting, and notes he’s being reckless with how he fights the Zombots. Shadow doesn’t believe the Zombot infection can harm him, as he is the Ultimate Lifeform, and keeps recklessly fighting the waves of Zombots.

Meanwhile, Sonic has run into Green Hill, and is now becoming exhausted by all the running he has to do to fight off the infection. He also struggles with the personal dilemma of whether or not he should’ve listened to Shadow in the first place and let him handle Mr. Tinker. Ultimately, he decides he was right in giving him a second chance, even if he blew it. Sonic runs back to Sunset City.

Back in Sunset City and we see Shadow make the grave mistake of grabbing a Zombot and throwing it back at the hoard. Upon seeing his hand now covered in the virus, he realizes how fallible being the ultimate lifeform is. Rouge yells at Shadow to run so he can keep the virus in check, and Shadow stubbornly refuses and keeps fighting the Zombots. His infection gets worse, and as Rouge calls Amy for backup, Shadow is overcome by the Zombots and turned himself. Sonic is now back at the truck to help guard it, when Rouge tells Sonic he needs to handle Shadow. Sonic thinks he just means that Shadow needs to be ordered to do something and tells Rouge he’d listen to her better, but after being grabbed and pinned down by Zombot Shadow, he realizes what she means. 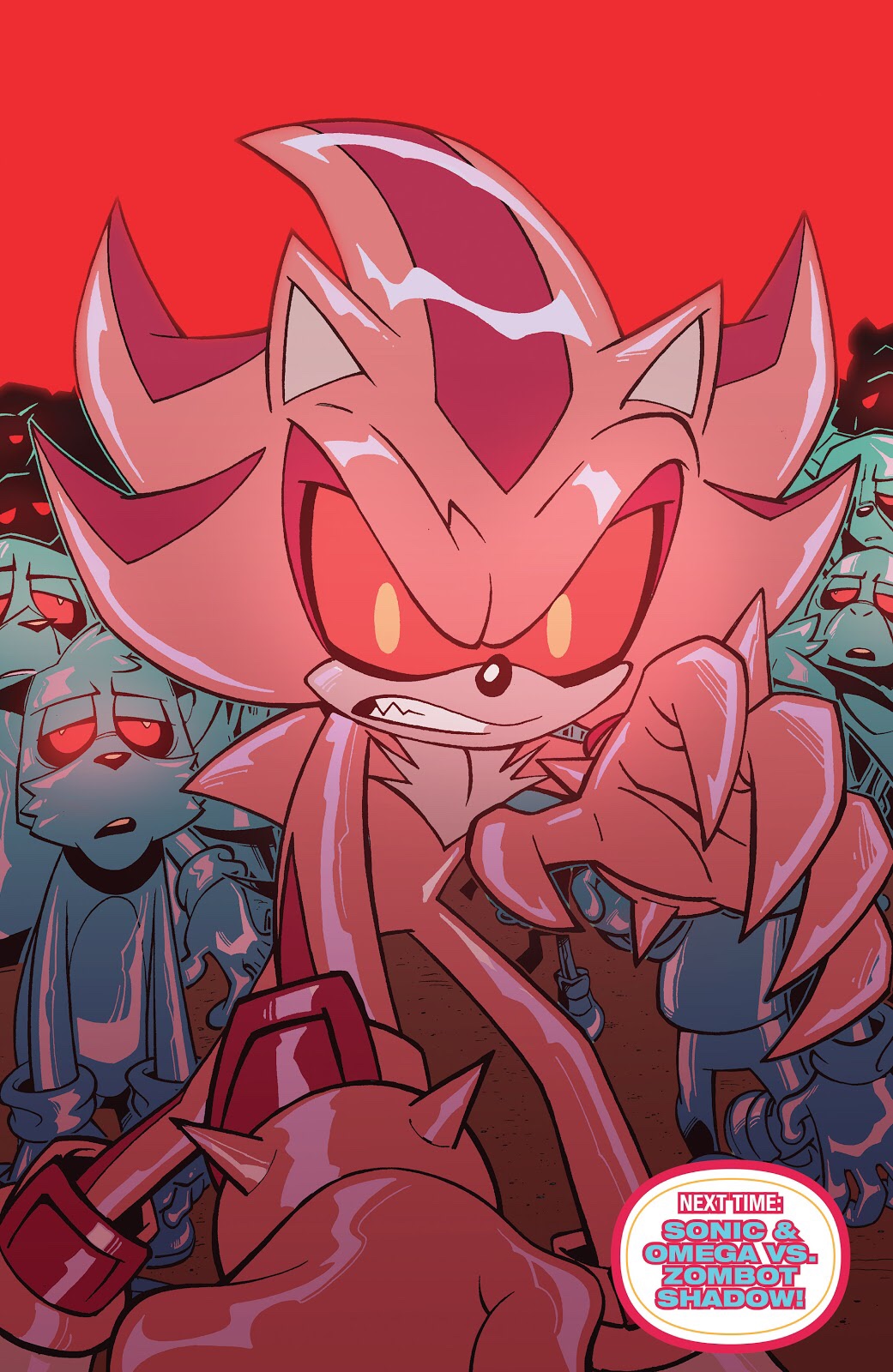 I’m going to say it again, you had to do it, didn’t you, Ian? I did say previously that I thought Shadow would be the next victim but I was not emotionally prepared to see my guy fall, and to his own stubbornness, too. I supposed I do have to say, if there was something that would be Shadow’s downfall, it would be his inability to listen when others tell him something. It’s his Fatal Flaw. Literally.

The writing in this issue was, of course, amazing as usual. Flynn proves how good of a handle he has on the characters and how they would react in certain situations. Shadow stubbornly refuses to run off his virus, Sonic does everything he can to help even at his own risk, Omega continues to be the battle-bot we all appreciate, and Rouge begrudgingly helps the people who need it. I think this issue in particular highlights Flynn’s knowledge of the characters, and the story of this comic was awesome. My one critique is that I didn’t really care for the first page’s background knowledge on Sunset City, it wasn’t really needed for me to enjoy the rest of the comic. The only reason I think it might’ve needed to be there was to explain why Rouge had an interest in this city in particular, but that page could’ve been substituted with a brief dialogue between Sonic and Rouge. Otherwise, extremely good comic and one of my favorites so far.

As for the art style, we see Jack Lawrence work on the art, and colors done by Bracardi Curry. This is obviously a deviation from the last few comics in this series, but Lawrence’s art style I think works well with the theme of this issue and how dark it is. Lawrence is very good with how he draws his characters, and the backgrounds are flawless. Lawrence captures movement in the artwork, which is a hard skill for many artists to develop. As for the coloring, this issue has more of a pastel, washed out tone, and at first I wasn’t sure how I would enjoy it but reading the comic I came to enjoy it. As this issue takes place in Sunset City, it makes sense to have the paler colors of a sunset take focus in the comic, so the coloring Curry did worked well with the setting. An amazing job from both of the artists involved.

Overall, I am happy with this comic. I truly enjoyed pretty much everything about the comic, and what I didn’t enjoy was overshadowed by everything I did enjoy. As for my Issue 20 predictions, obviously we see a fight between Sonic and Zombot Shadow. I have no predictions on who wins, but I am going to guess that Sonic’s own infection is going to reach critical mass within the next issue or two. It feels like we’re reaching the climax of this story arc and it should be fun seeing what happens next.