SAGE is very big this year and and I’ll be providing feedback on as many games as I can manage. *Whew* Let’s buckle up. 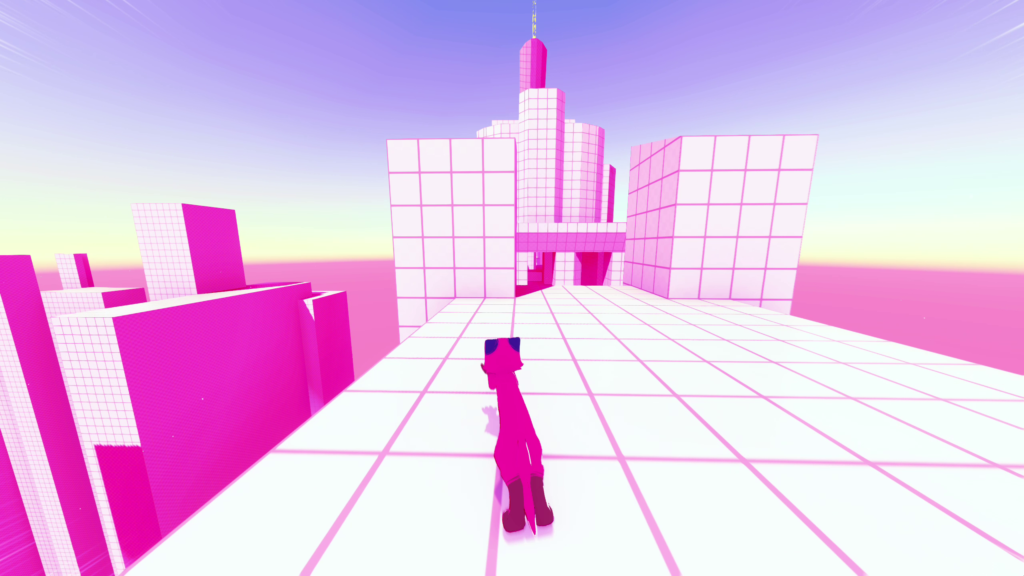 Much like Sonic Utopia and Sonic Islands, I’m very much in favor a new ways to approach fast-paced 3D platforming, like some sort of alternative to the boost formula. The game is clearly pre-alpha, but it’s found a way to make its test stages still have a cohesive aesthetic. There are parkour elements resembling Sonic Lost World and they feel quite satisfying here. This is probably the only  SAGE game to make nice use of FMOD, the middleware sound engine. Though I feel the music is a little too dynamic. When you hit full speed, the music blasts at pop-radio volume and it’s just a few decibels too jarring. That moment certainly packs a punch but I can’t help but feel it’d be best to focus on the dynamic instrumentation (which is present) and tone down the volume curve for something more subtle. There’s actually a lot of musical incorporation here; buildings and speed lines pop in and out based on the current song’s meter and it’s a very nice touch. No sounds effects at the moment, which almost adds to the outer-wordly musical vibe, but that’s probably not intentional.

When going at full speed, you have to do a lot of manual camera work to pull-off sharp turns. If this game is going to continue development, I strongly encourage finding ways to make the camera more player-friendly. There’s a good core foundation here and it hopes it grows into something cool. 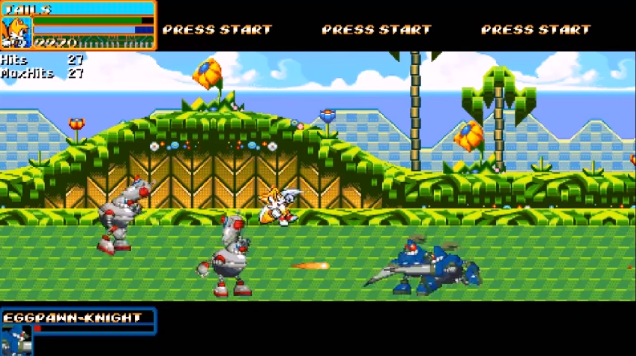 This is a side scrolling beat ’em up game with Sonic characters and….whatever randos from the 90s the devs felt like throwing in. I’m serious, we’ve got Battletoads and Swat Kats up in here. Like most beat ’em ups, I personally find it repetitive after the 50th hoard of enemies though there is some variation to mix it up. There are hoverboard and mach speed sections, where you punching and moving at the same time giving it a train-fight feel. The Chemical Plant stage plays close to a 2D platformer, but the controls just aren’t made for precision platforming over a bottomless pits. I found myself using Tails to easily fly over it all. Once you jump, you’re momentum is set and there’s no changing it. That level commitment doesn’t feel fun when paired with floating platforms. I’d suggest tweaking the movement controls (or consider scrapping the 2D platformers stage all together).

The controls are a little unforgiving for movement in general; it can be hard to intentionally aim for a certain enemy so you are better off just button mashing. You can bring in several AI team mates to help you, which I strongly recommend. Despite all the crazy options to bring in TMNT and Earthworm Jim, I stuck with Knuckles and the Chaotix as my group because I’m a sucker for canon-approved RPing. Though the voice clip reminded how crazy it is that Scott Drier said, “SHHHIIIII” into a microphone and no one at Sega was bothered that it was too close to a “T for Teen” rating.

(also, the menu font is unreadable against the background. I’m not sure how many game settings I changed on accident) 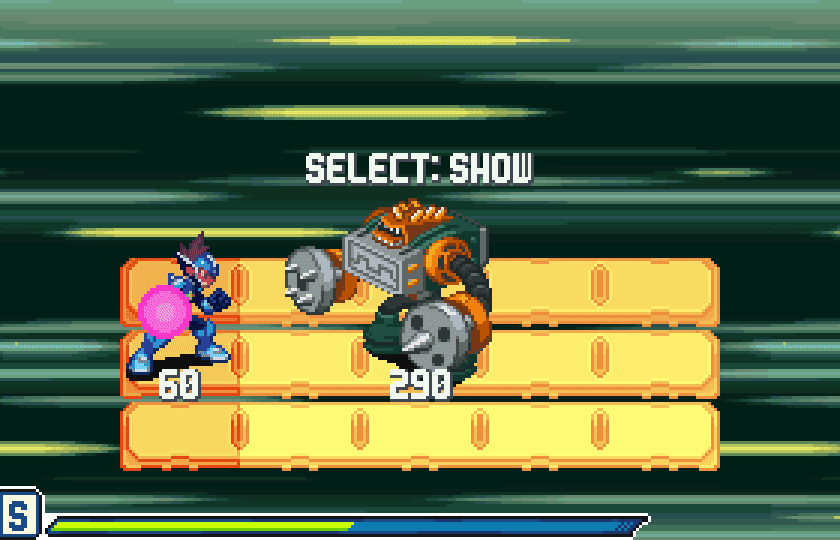 Based off the Campcom’s MegaMan: Battle Network and Star Force series, there’s not too much to show at this point. I was never too fond of the original GBA games, so keep that mind. What’s here seems decent enough. Decent presentation, the mechanics are sound, there’s just very little at the moment to comment on. Though, I do find it charming that they included an example of the kind of humorous dialogue they want to implement. I respect any one proud enough of their writing to include it as an option in the stage select menu. Nice!

If you are a fan of MegaMan’s GBA outing, you’ll probably want to keep an eye on this one. 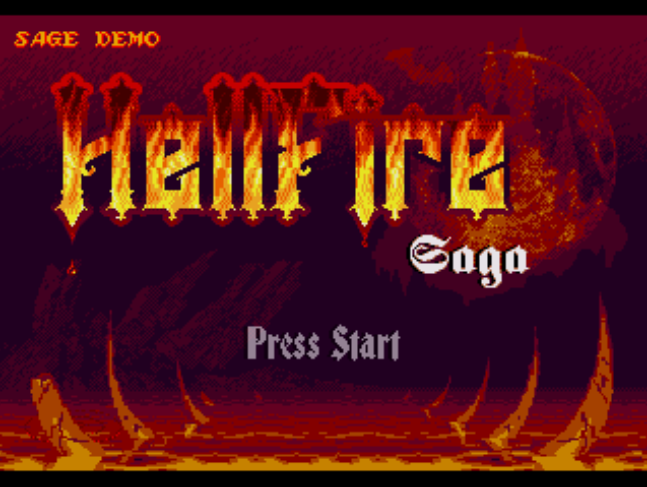 I prefer it when Sonic fan games feel like they could theoretically be an official game. In other words, I like fan games that aim to be on-brand and don’t do anything outrageous like gory battles between Sonic and Goku. While I can understand the argument for “hey, it’s a fan game so why not embrace the fact that it’s not official,” I’m just simply less interested in the chaos and anarchy of an “anything goes” fangame. It’s much more difficult to operate within the pre-established boundaries and still create something new, which makes the end result much more elegant and pleasing to me. (insert a thousand comments about how I’m an worthless idiot)

Hellfire Saga, on the other hand, is one of those games that says, “screw it, let’s have Sonic squirt out blood-spray particles when he gets hit.” It throws in assets from Castelvania and Ghosts N Goblins for a very “halloweenie” experience. And while the title screen insists that it has absolutely “nothing to do with Sonic.exe,” it hard not to look at this game and make the connection.

Hellfire Saga is a mod that runs on Genesis hardware, which I have nothing but respect for. Coding for a 90’s game console is not fun, so I commend it when someone is willing to write their own custom boss battles in 68k assembly. The level design is ok but the focus really is on the boss fights, of which there is a nice variety. There’s plenty of creativity going on here and it’s a definitely a take, but to be honest, I am not a fan of the spooky and aren’t interested in watching Sonic battle hell demons.  (though if you’re the type that prefers out-of-left-field fangames, see my thoughts on Sonic And the Mayhem Master later) 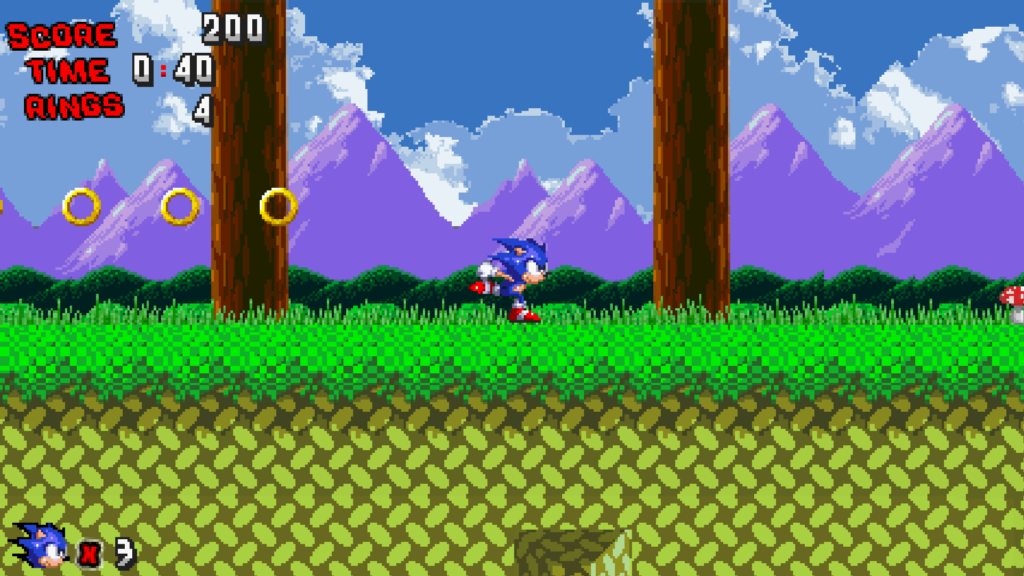 SLIP aims to be a faithful Classic Sonic game but it’s got a lot of rough edges. This is one of those fangames where there’s a seemingly arbitrary cast of playable characters. You have your choice between Sonic & Tails (as a unit), Mighty, or Metal Sonic, with little reason as to why these specific three are our available options. I didn’t find any character-specific routes or anything that seems to particular suit those characters mechanically or narratively. The level design has promise in parts, but there are some collision masks for certain loops-de-loops that don’t work. You can also run offscreen during bossfights and the boss’s laser beam doesn’t go away after it’s defeated. Gating stage sections to non-regenerating rings is questionable. Also, Might’s stomp is the only character move that requires the SHIFT key, which makes it an easy move to miss if you don’t read the booth description. If I were the creator, I’d polish the crap out of it and keep studying Sonic levels’ design, as the latter could end up being a strength here if cultivated. Consider going through everything with a fine tooth comb. 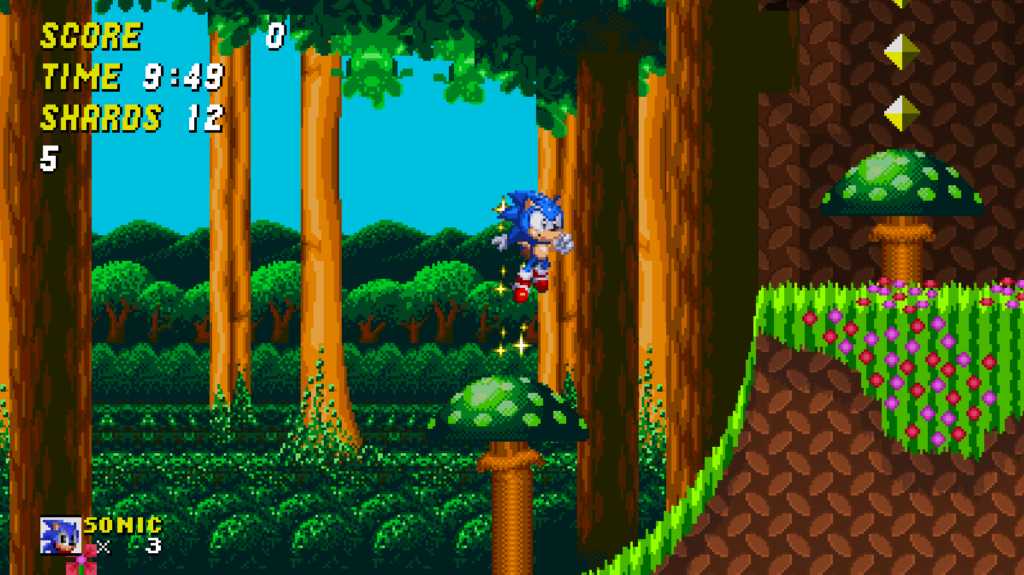 Aiming to be a bridge between SatAm/Archie Sonic and Genesis Sonic, this game lets you play as Sonic or Sally Acorns. I spent most of my time playing as the later, as I found that her shooting mechanics served the game well as a good alternative to Sonic. The game looks and plays decent and the level design is fine as well. I honestly don’t have much else to say. 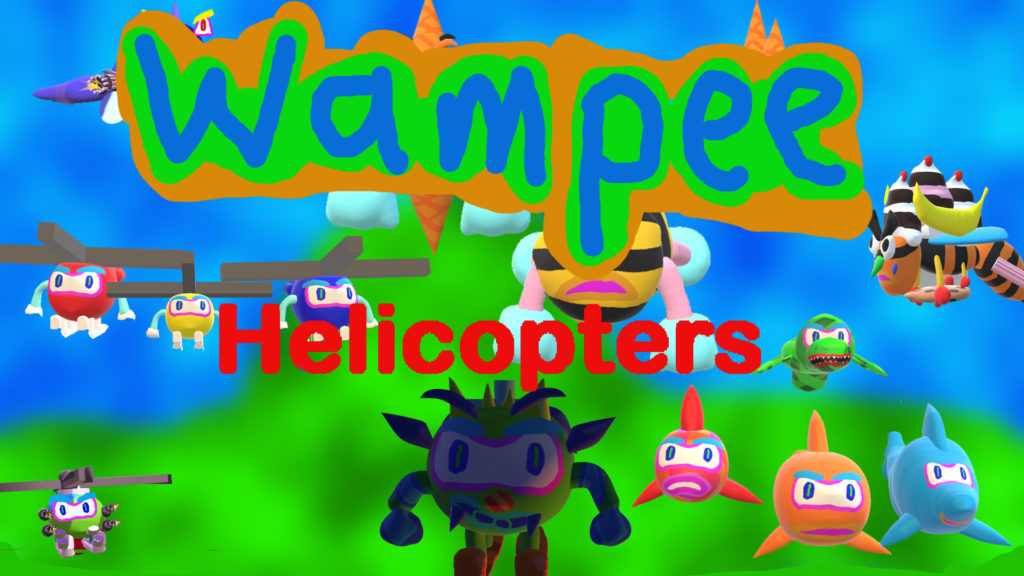 When you download a random game from the internet, you have no idea who or what made it. If I had to guess, I’d think that Wampee was possibly made by someone very young. The game, with a largely hand-drawn-in-MS-Paint art style, has you flying around as a helicopter dogfighting with giant shark airplanes, sentient tornadoes, and bees with ice cream sundae hats. Wampee, the game’s creator, actually has three games available on Steam right now, including this one. This is game not amazing, but I gotta say, it brought me joy. Wampee, whatever you do, please keep making games.

One of Wampee’s other games, though very similar. See above. 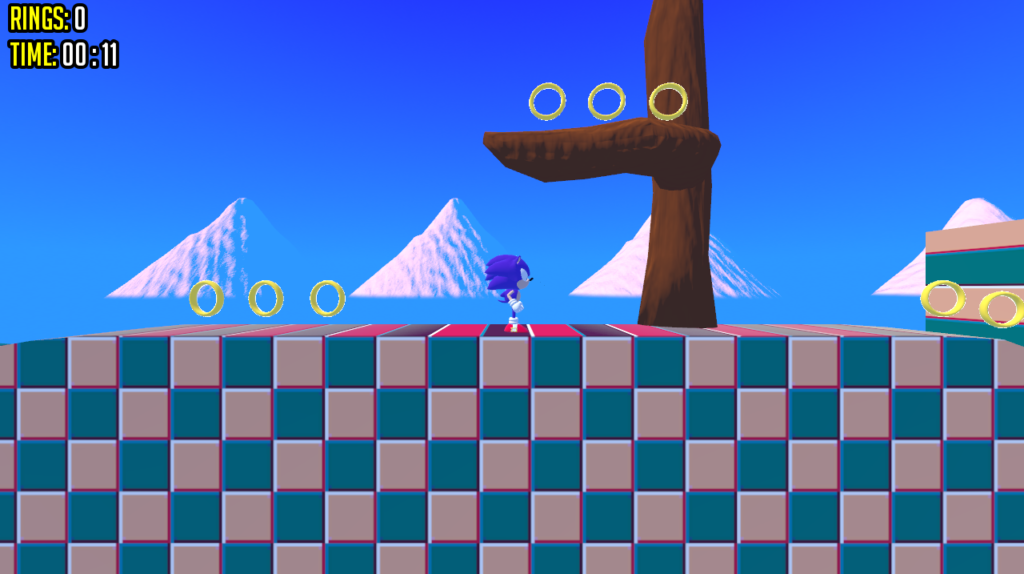 A 2.5D Sonic test engine. Physics work well-enough though hills can have strange clunky popping behavior. There’s some weird high-to-low layering popping when using one way platforms. It seems unnecessary. I’d suggest using the Sonic Generations method and have the one-way’s stick out with a lip. Not much here at the moment, though I wonder if this is the only Sonic fan game in godot? 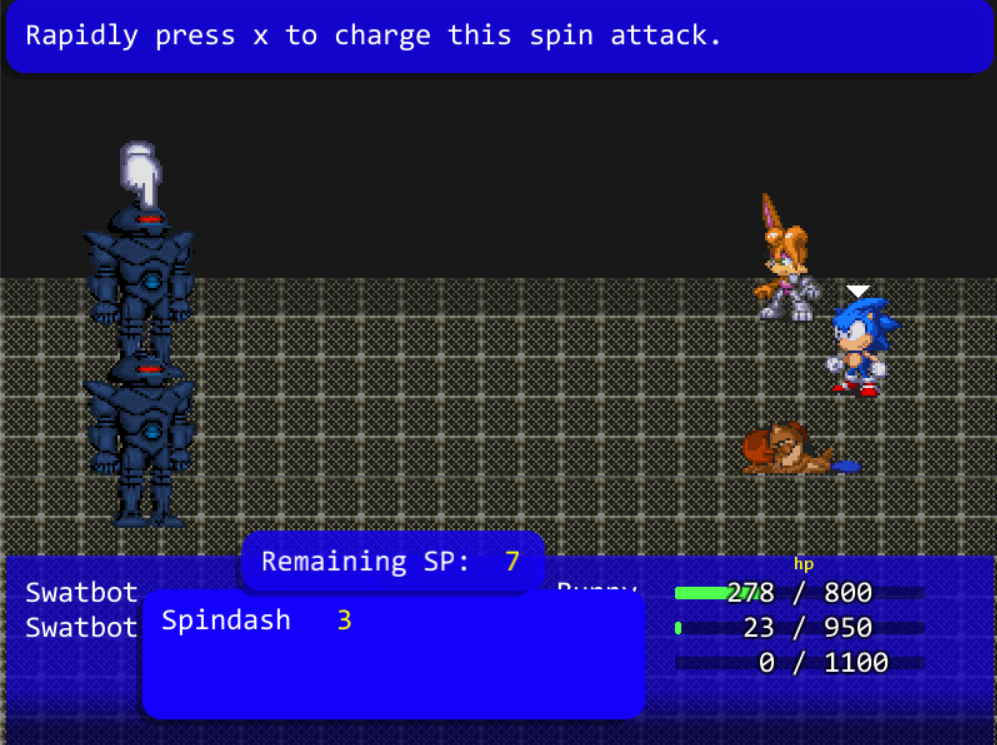 I’m not best person to review this because I don’t play old school RPGs, especially with turn-based combat (I’ll never understand why mortals enemies would politely take turns punching each other). But my bias aside, it’s seem fair for what it is (an RPG set in the SatAM universe). A nice effort with a character switching mechanic to use.

Though, what’s with the general midi soundtrack? Is that some old school RPG reference I don’t understand? 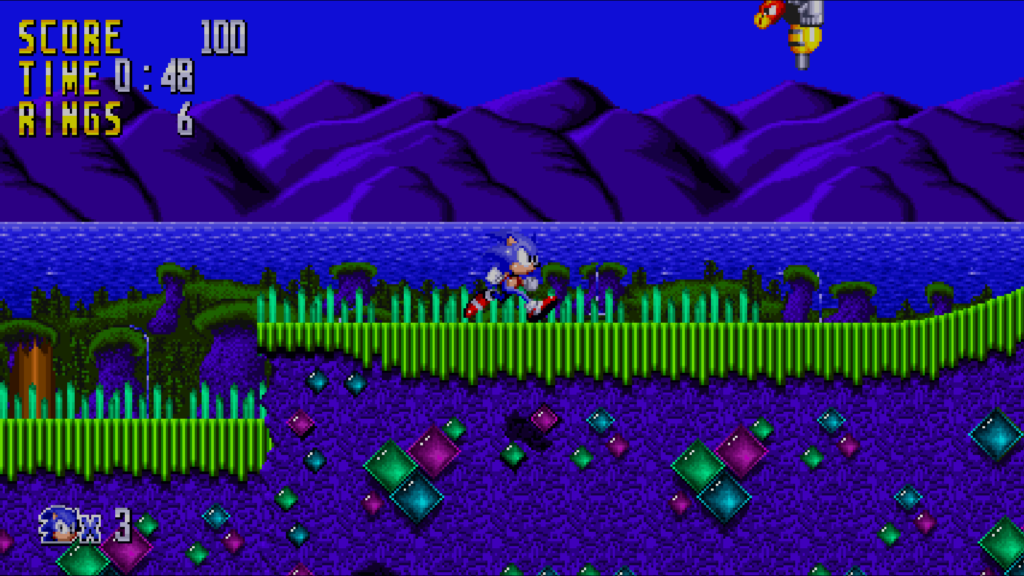 Decent level design here (despite Jazz Jackrabbit tilesets) that is held back by one-too-many dead stops and some cheap enemy placement. If I am running at full speed and an enemy comes out of nowhere, that’s no fun. The turtle badniks need a more defined weak point, and I suggest the shell bounce the player instead of damaging them. Some promise here, is the creator keeps at it.

One last thing. The games uses the Mania sprites for Knuckles, but recolored to make Knuckles…you know…actually red like he’s supposed to be instead of flamingo pink. That’s something Mania itself, for some odd 32x reason, couldn’t seem to understand. So you get some points there.

A reworking on the 3D Sonic engine, Sonic Infinity, in Unreal. It’s a flashy, good looking engine, though sometimes too flashy. When Sonic is boosting, the speed effects are so pronounced that I can’t tell where the flip I’m going.

I’m not familiar with the original engine, so I’m not sure what’s new and what’s added, but one area that needs improvement (common to most fan 3D Sonic engines) is the camera. You have to do a lot of manual adjusting to get it focused on what you want. At one point, the camera ended up very zoomed out and I couldn’t zoom it back in.

There are tubes/pipes you can walk through, where the controls adapt to accommodate tubular movement and it feels very natural. 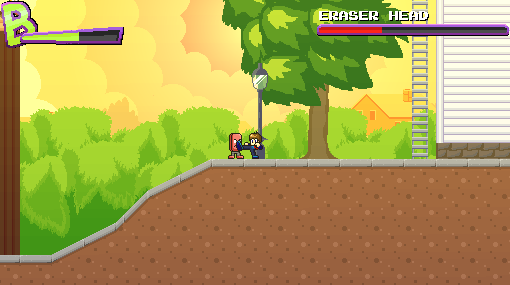 Really charming original indie! Great writing effort right off the bat to establish the protagonist as someone we can get behind, with a nice save-the-cat that you actively take part in. Enemies can be a little unnecessary difficult in an unsophisticated manner. The overall style and presentation of the graphics and music feels like it’s lacking a level of cohesion that this game deserve. I wish I could be more helpful than that, but I can’t quite but my finger on what it’s missing. Either way, one of my favorites from the bunch and I suggest you keep your eye on this game. Could shape up into something very nice. 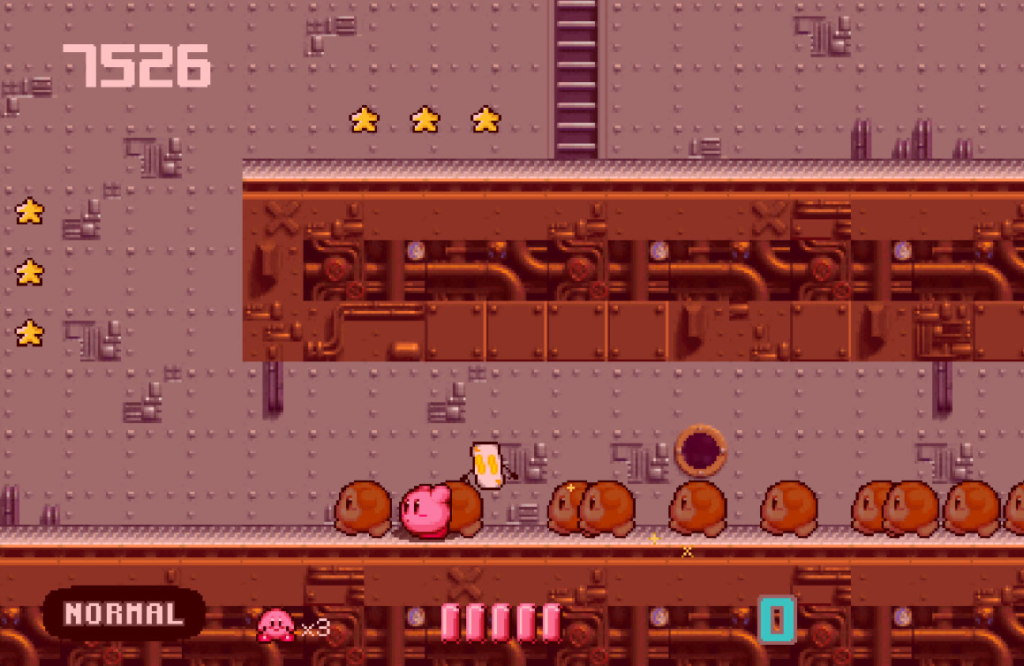 Fun and cute Kirby game. Despite the zip being packed with music files, no level music ever played for me. Only boss fights. Clean and cute, let’s just not talk about this one too much before the Big “N” rips it away from us with lawyers.

Forgive if this all seems like a bunch of quick hot takes. Game development is hard and totally understand that from personal experience. I hope my comments help, not harm. A dry wall of text without a tone-of-voice to match sounds much harsher and colder when your inner-self-critic is reading it in their own voice. If any creator from SAGE wishes to talk to me about their game or wants me to expound on my feedback, I am more than happy to listen and share. Good luck out their my fellow creators!

Stay tuned for the next article!

Vote in the SFGHQ Minigame Contest

Inside the Pages: Sonic Archives #16