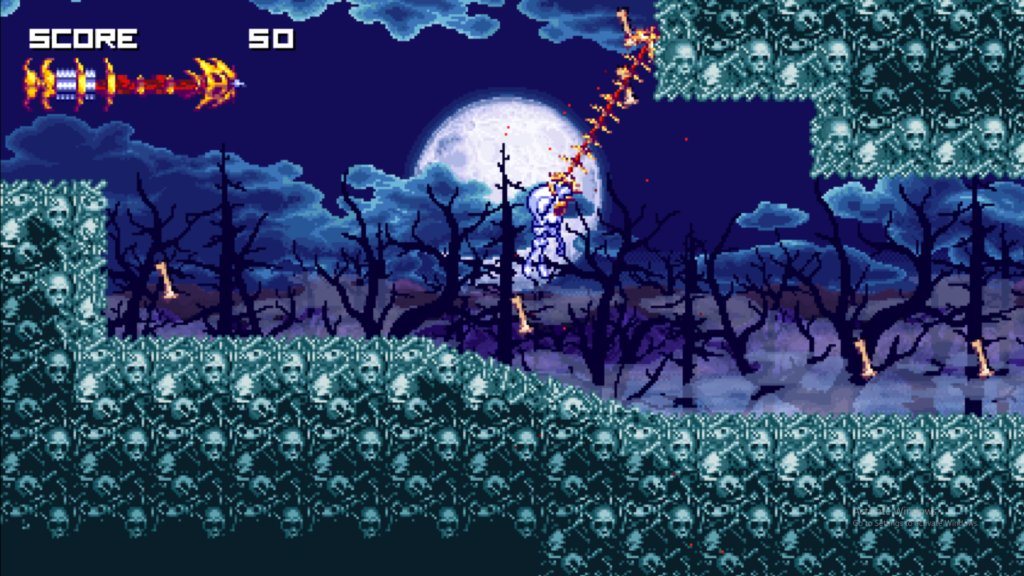 Very interesting core mechanic here! The bone grappling hook is the kind of mechanic that can carry a whole game with a lot of depth and nuance. There is a lot of masterful techniques and speed running strats to be learned here, which was a huge source of frustration in this context. I absolutely struggled to get any momentum out of the character for the first 15-20 mins. The demo just gives you a sandbox to play around in to learn the mechanics. I pushed through the steep learning curve because I trust the developers (Mania’s Headcannon and the Sonic Chaos remake team), but without that bias, I would have put the demo down within 3 minutes. This game has a Kickstarter coming up at the end of month, and if it is to be a success, I strongly suggest tutorializing the crap out of it. Interviews with the devs seem to hint at this, which eases my mind a bit. If you want to give this a try, I suggest watching some videos of other (better) people playing it, to get an idea of how to use the hook before jumping in. I went in basically blind, which I don’t recommend for this technical preview.

It’s worth mentioning my personal bias (which I know I won’t be alone). The controls, as I understand them, seem to prefer a crab-claw-like grip (index finger on the bumpers, middle fingers on the triggers) on the gamepad. I habitually hold a controller with my index on the triggers, switching them to the bumpers as needed. To effectively use the grappling hook, you’ll need to use all the bumpers and triggers in tandem, so if you are like me, you’re better off adapting to the two-fingered grip.

I also found the combat not feeling quite as satisfying as I’d want it to. It’s not very friendly if you want to quickly switch directions when initiating an attack (say an enemy is behind you) and the knockback feels way too punishing with such small platforms around. You can grapple yourself into an enemy and damage him with your momentum (which is friggin’ awesome), but if you grapple into a pole a mere inch in front of the enemy, your momentum ends up hurting you, because you were grappling the pole and not the enemy. I found myself taking damage unfairly one too many times because of a pole placed too close to an enemy.

It sounds like I’m being harsh, but I actually ended up enjoying my time with this. It’s hard to put the thrill of the grappling hook in words, because you have to get a tangible feel for it with a controller in your hands. So I encourage you to play it for yourself. As a technical preview, it’s quite nice, and I am looking forward to the Kickstarter.

Sonic Metallix, despite it’s edgy name, is a cute lil’ 8-bit style platformer. The simple aesthetic and scope was a good choice for this developer, because there’s a certain humility in it that I admire. I saw a couple of issues with the GHZ checkerboard alignment in the tiles that I would suggest addressing. There are a few bits of questionable level design, such as a giant bottom pit that comes up with no warning (though a checkpoint is a placed right before it, like a band aid solution). At one point there is an arrow of blocks pointing downward as if hinting a secret, but if you follow them, you die in a bottomless pit. Luckily, I was able to avoid a Game Over from these cheap deaths by using GameMaker 8’s default save-and-load functions that the developers apparently left in (F5 and F6 if you are wondering).

The boss fight moves too quickly, and would likely be better in a small space with a stationary camera. Overall, a relatively harmless addition to SAGE. Charming.

Sonic and the Mayhem Master 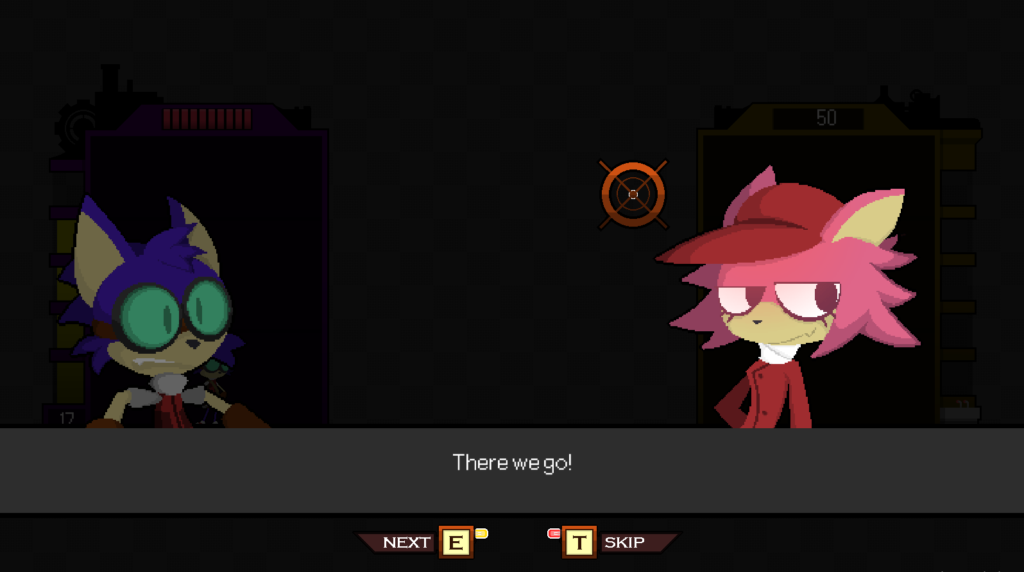 In Part 1, I mentioned how I prefer fan games that respect the established rules and boundaries of the official games. Sonic and the Mayhem Master, on the other hand, is an example of a completely not-on-brand fan game done right. It establishes its own new rules, with fresh originality, and sticks to them. What you see here are steampunk redesigns of the Sonic cast, with personality changes as well. This takes the fact that it’s not official and has good fun with it. (Though not sure I’m completely sold on cigar-smoking Amy). The game is an RPG with some abstract Undertale-like combat. It’s got a lot of charm, some good writing, but I did find the combat mechanics a little too difficult this early in the game. I died on the tutorial (though credit where its due, the tutorial was presented wonderfully). 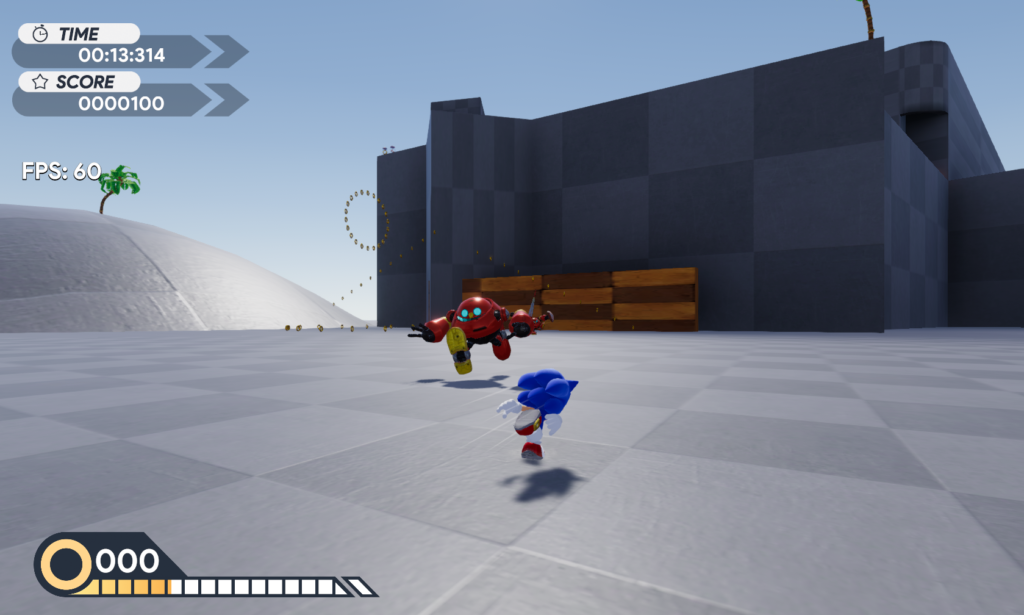 Now, here we go. If there’s a direction I’d like to see 3D Sonic take, it’s here. This is a wonderfully controlling take of momentum-based modern Sonic gameplay. Established previously in other fan games like Sonic Utopia, the real sense of speed is achieved by rolling in and out of a ball, and it feels nice. It particularly nailed how Sonic controls when running on walls. It does lack the smooth flow of Utopia, which I suggest this game learn from.

Knuckles and Tails are present here as well, both respective of their Adventure/Advance movesets. Knuckles, in particular, feels bad-to-the-bone to play. Running up to an Egg Pawn and dishing out a three-hit combo is an absolutely joy and reminds me why I fell in love with the red guy years ago (before repeated derpiness made him less appealing). All the moves you’d want are here, including clever use of Sonic’s bounce attack from Sonic Adventure 2. It feels like a perfect update of how these wonderful characters played in the Adventure games. A very, very promising framework. 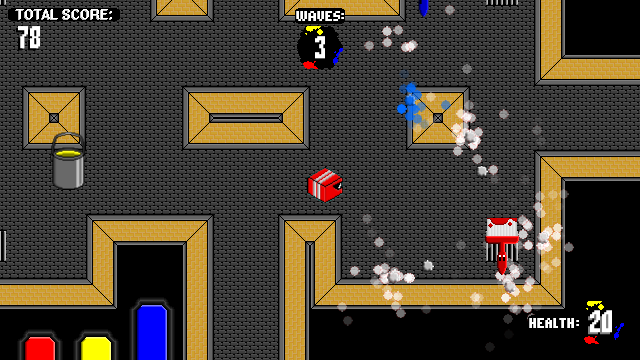 An unique bullet hell experience here. You must color code your bullet to match your enemies, which will be one of the three primary colors (Sonic Heroes anyone?)
The game plays well enough, has wide options for controls (works great with a gamepad). I’m not very good at these types of games, but I made it through a good portion of the demo. It can get a little repetitive, but there are a balanced range of characters to choose from (each with a special ability). I gravitated to Ms. Daredevil, who has a nice dash ability. 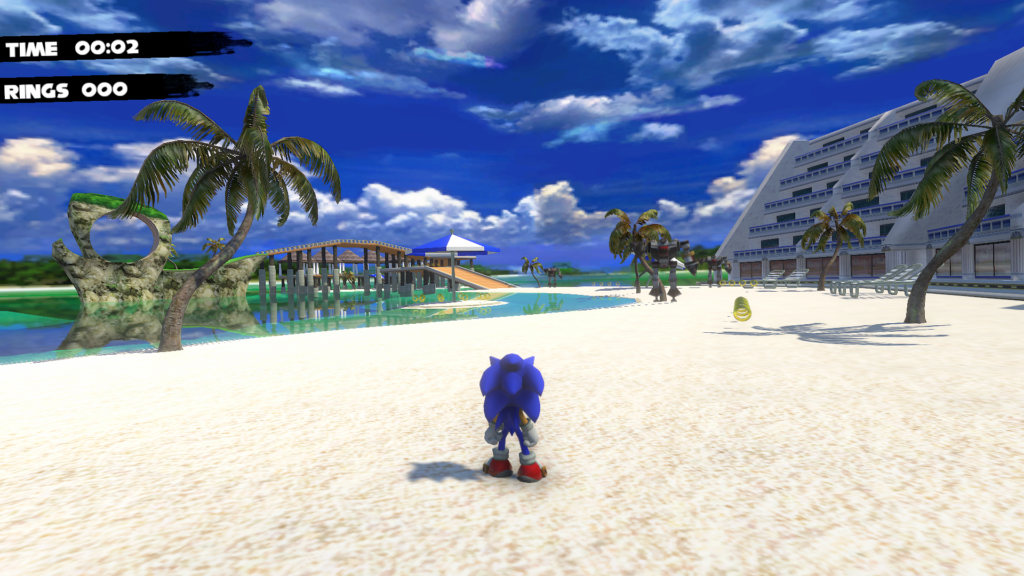 Another 3D Sonic framework. This is less complex than Project Hero, thought not bad. It’s a return to more simpler Adventure style gameplay. The spindash works well and isn’t overpowered. Sonic’s handling reminds me of Sonic Jam of all the things, and serves it well. And thank goodness, the camera is actually programmed to help navigation, a feature lacking in most 3D Sonic fan projects. The loop-de-loops are entirely scripted, but eh, whacha gonna do? The splines, when used in later sections of Emerald Coast, feel appropriate.

This game definitely made a choice for is artstyle. Sonic and Knuckes are beveled hard. Environments are shiny and sheen. But I can’t help but feel that it’s all a bit noisy with lots of grainy texture. It can be hard to tell the foreground from the background. The tiles Sonic’s Act 2 start having a shadowy/darkened effect on them, which I thought was a tell that it was a background tile, but nope, you can still jump on them. The level design varies.

Sonic’s Act 1? Pretty good, though the monitors may be a little too numerous. Sonic’s Act 2 is where it starts dipping in quality. There are too many questionable swinging spike balls, including a section over a spike pit that occurs right after a checkpoint with no rings to help you tank the hits. If you get hit by the spike balls, you fall into the spike pit below, but you’re invincibility frames have run out by the time you land on the spikes. It kills you instantly like Sonic 1.

Knuckles has is own stages that are built to better serve his climbing ability. His second stage has a light on/off mechanic like Sandopolis zone, and it’s executed decently here (though the light switches probably shouldn’t be one-time things). It actually has an effective start where the lights are off and there’s no music. Find the hidden switch, and it all kicks in. Now you understand the mechanic for the rest of the stage. Nice.