Not quite monkey magic

I feel like I should get it out of the way up front: I’m only a casual Monkey Ball fan, and honestly, the most casual Monkey Ball fan there is, probably. Most of the time I’ve spent playing this franchise is with Monkey Ball Jr. on the Gameboy Advance, which is a shockingly good pseudo-port of Super Monkey Ball 2, save for the fact the GBA doesn’t come with an analog stick. I have also played a tiny bit of the real Super Monkey Ball 2, though not nearly as much. Beyond that, I’ve mainly been a spectator to this franchise, both in awe and fear whenever a Games Done Quick livestream marathon would show off one of the game’s “Master” levels.

The Monkey Ball series has always struck me as very similar to Sonic the Hedgehog, where they keep making them, but I’m not sure they remember why. Sales, of course, and I’m sure that the overall Monkey Ball franchise is probably way more consistent in terms of quality than Sonic usually is, too. But there’s no denying a sense that it feels like Monkey Ball is spinning its wheels, somewhat. I get the impression they don’t know what to do with it.

This leads to games like Super Monkey Ball: Step & Roll, which let you control the game (at least partially) using a Wii Balance Board. The very similarly-named Super Monkey Ball: Touch & Roll released on the Nintendo DS, allowing you to steer with a touch screen stylus. And then there’s the infamous Super Monkey Ball Adventure, perhaps the most analogous to Sonic, where they broke the normally puzzle-centric franchise out to feature a story mode with an overworld, quests, and dialog. It gives the sense that the Monkey Ball series is full of games that can mainly be described as “this is the one where you do (x).” Same game, different gimmicks. 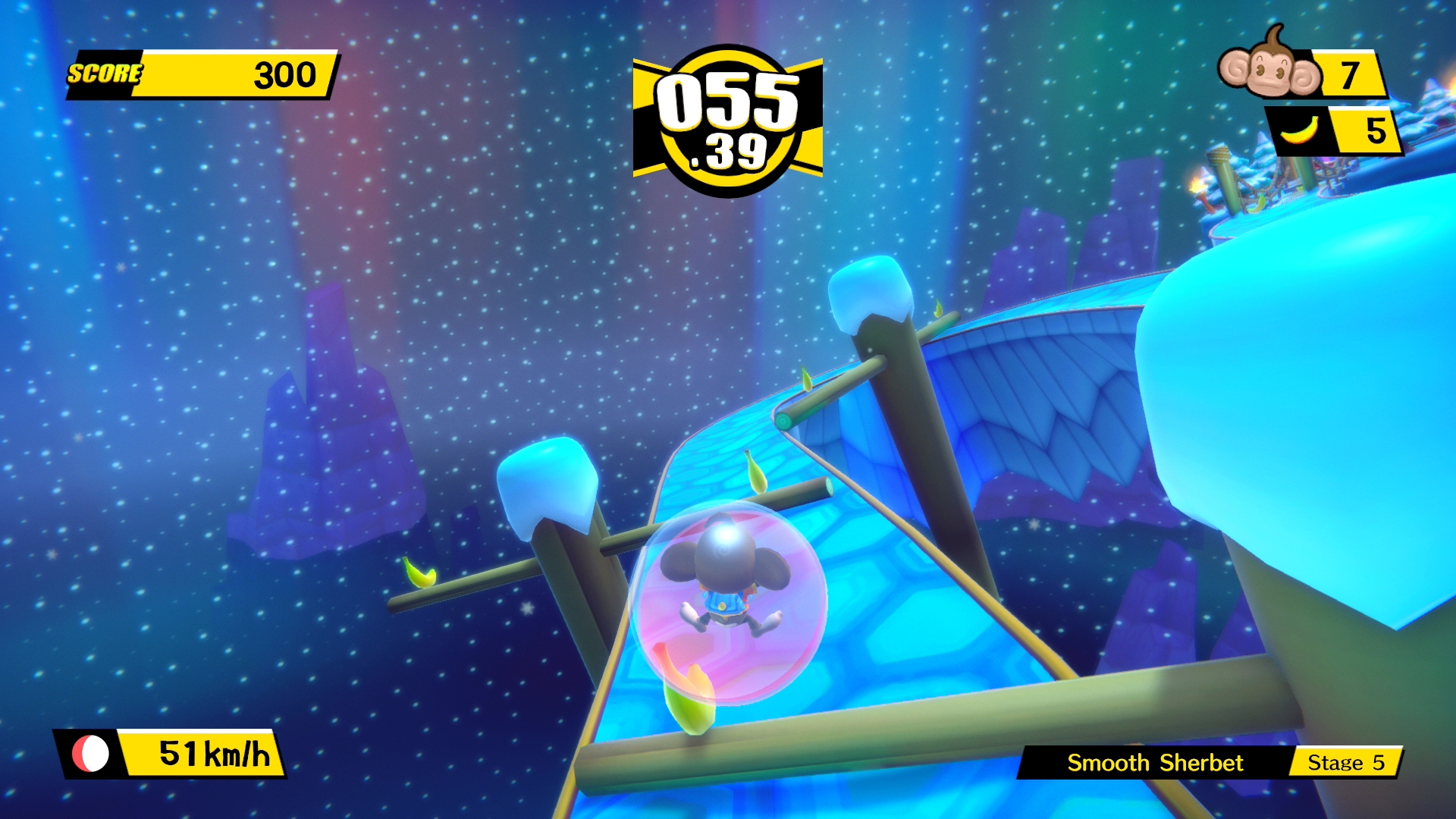 The addition of a jump button leads to more platforming-heavy levels.

Why they chose to remaster Banana Blitz of all games then becomes something of a mystery. It’s the Monkey Ball game where you control it with motion controls — in this case, it was tilting the Wii remote. The remaster converts everything back to more traditional Monkey-Ball-style analog stick controls, which depending on who you are is either a welcome change or kind of a bummer. Having never played the original Banana Blitz, I can’t personally say one way or the other whether it’s better than it was, but for what it’s worth the controls never really seemed to get in the way. It’s the way you expect Monkey Ball to feel.

Banana Blitz is also the game where they added a jump button, which has the most significant impact on the way levels are laid out. You could kind of jump in past Monkey Ball games, but only by doing a very complicated board-flipping maneuver where you’d move the analog stick a certain way to ramp your character up for a short hop. Here, it’s just a button you push, and boards are laid out much more like a 3D platformer, with moving platforms you hop across and the like. It’s an interesting change, but even for a Monkey Ball novice like myself, I admit it doesn’t feel very much like a Monkey Ball game to me.

As far as I can tell, all of the original levels are present and accounted for. The original game’s cel shaded look has been traded for a slightly more modern rendering style, though I’m torn on whether or not it’s really better. Though the new visuals aren’t significantly different (or even worse), the change could be very easily seen as removing some of the game’s style, which kind of sucks. Otherwise, it’s nearly identical — though some levels and bosses have been modified to make them harder, perhaps in response to the game having proper analog stick controls now. Bosses use their desperation attacks sooner, and the pinball-style rails featured in later levels have been converted to thin, flat walkways that require balance.

Boss fights are something else that’s probably exclusive to Banana Blitz, and they definitely aren’t fun. They waver between being dead-easy and chaotic nonsense. Much past the second world, it felt less like I was overcoming a difficult challenge and more like I just got lucky and happened to survive by accident. Mostly it’s just a lot of waiting for the boss to expose their weak point so you can gently rub against it until their health meter empties out. Again, it doesn’t feel very much like a Monkey Ball game.

At seven worlds (eight if you count the unlockable), it doesn’t stick around very long, either. Worlds are broken up into eight stages, plus a bonus stage and boss stage. In true Monkey Ball form, stages are only a few seconds long, and rarely more than a minute tops. For Monkey Ball pros, there’s maybe an hour’s worth of game to play in here. They attempt to offset that with a feature brand new to this version of the game known as the “Champion Medal.” You earn one of these Champion Medals by playing through an entire world without getting a game over or restarting any of the stages. In arcade terms, it’s known as a 1cc, or a “one credit clear.” Earning Champion Medals counts towards unlocking all of the game’s bonus costumes, so it’s worth making the effort.

There is one messed up thing about Champion Medals, though: as you collect bananas, you earn 1ups for every 20. Lives carry forward as you play the game, so it’s a solid strategy to take your time early on, racking up as many 1ups as you can during the easier levels to give you a buffer when difficulty ramps up later. Having a big stock of lives helps with Champion Medals, too, but once you have the medal, the option to restart the Champion Medal challenge from that world gets disabled. So let’s say I have all the Champion Medals for worlds 1-5, and I want to make another attempt at the Champion Medal for World 6. Since I already have those earlier medals, I can only restart the challenge from the start of World 6, because the game blocks me from redoing the challenge for earlier levels to farm up lives. 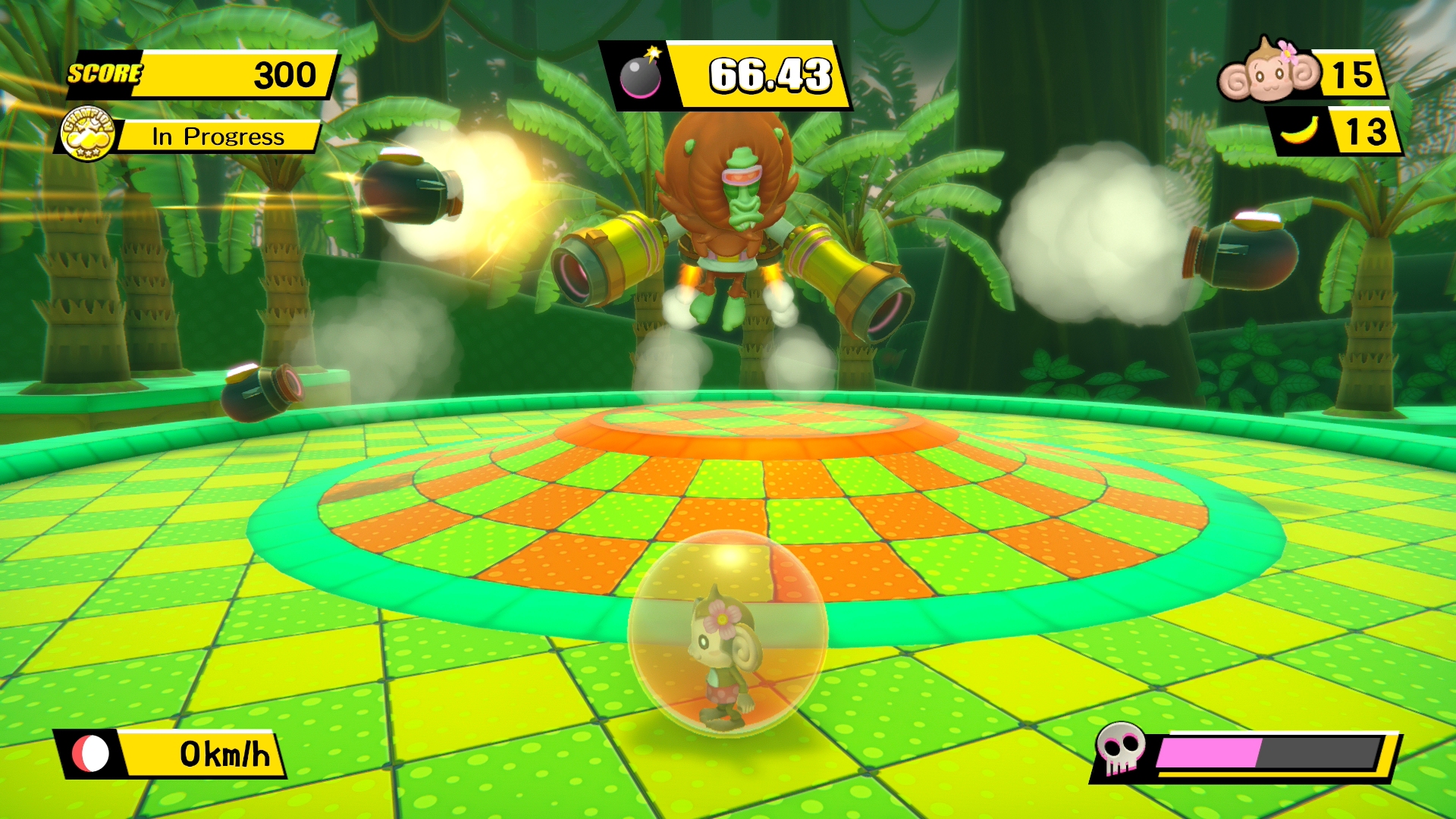 In other words, if you start the Champion Medal challenge, it’s probably the easiest to do the entire game in one go the very first time you play it — either that, or you intentionally throw getting the medal for World 1 and save it for last. If you do it that way, you can always start the challenge from the first world. It’s possible that you can just start playing from the beginning of any world and it’ll count as starting the challenge, but the level select menu specifically has a “Retry Champion Medal Challenge” button, suggesting you need to use that to go for the gold. Unfortunately, I am unable to test this, as the only world I don’t have a Champion Medal in is near the end of the game, where as of this writing, I am stuck. Regardless, it’s a nice idea, but poorly implemented.

Monkey Ball is also known for its party games, and Banana Blitz HD packs in ten, each one playable for up to four people. Classics like Monkey Target make their return, but most of the party games feel under-developed. Take “Monkey Snowboard,” which could be charitably described as a worse version of Monkey Race, a minigame that appeared in Monkey Ball 1 and 2. Snowboard lacks the course variety or the gameplay depth of race, feeling more like something a college student threw together in Unity over the weekend for a school assignment. I understand that can be used to describe some of the best Monkey Ball party games, but there’s a blandness to a lot of Banana Blitz’s offerings. For example, “Space Monkey Attack,” which just throws your monkey of choice in to a generic vertical shooter. The worst is “Whack-a-Mole,” which is exactly what it says on the tin: the world’s most generic minigame, featured as a throw-away bonus in literally hundreds of other games at this point. Here, it’s just padding, when there are so many better choices to pick from. 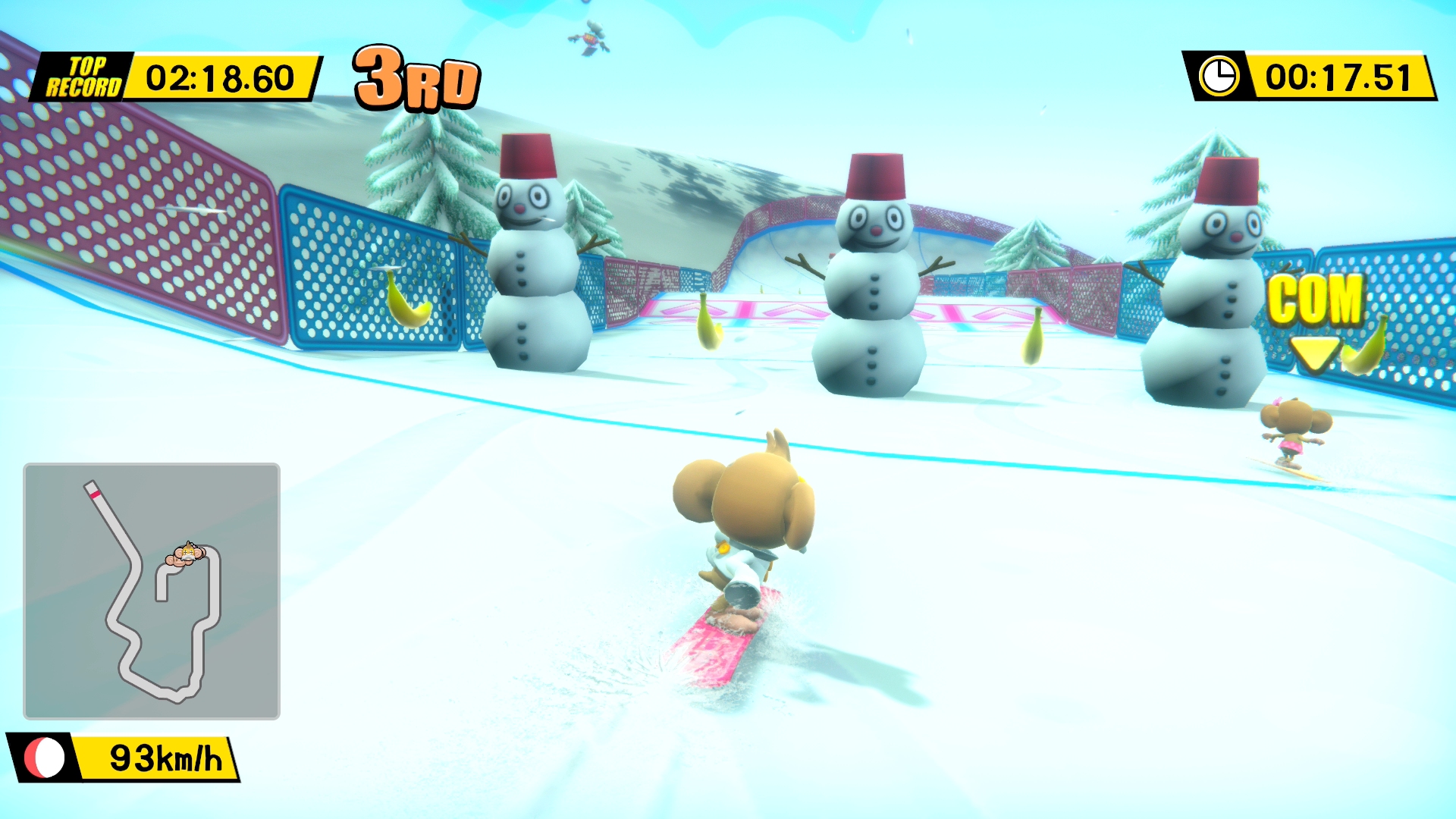 With only three courses and clunky controls, snowboarding sucks.

A bit of an aside, but there’s an odd little quirk to the party games, and it extends a few other places, like Time Trial mode — most of the unlockables in this game come in the form of alternate costumes for the six playable characters. Now, if you’re having friends over, and you put in Banana Blitz so people can play the party games, one would think it would be beneficial to have those alternate costumes selectable for a fun bit of personalization, right? Banana Blitz does not agree. The unlockable alternate costumes are only available in just one mode — the main single player campaign. I’d expect maybe there were issues with how characters animate in party mode that prevents alternate costumes from being selectable, but it applies to Time Trial mode, too, which is literally just the same levels from the main mode, but now you log your fastest times. Not too long ago, Sega also revealed Sonic was an unlockable character. Since he technically counts as an alternate costume, you can’t actually pick Sonic for the game’s Time Trial mode. Imagine Sonic the Hedgehog being banned from a mode all about going fast!

That sums up my time with Super Monkey Ball: Banana Blitz HD, really. I can’t really say I hated it, as that wouldn’t be fair. But you find yourself rubbing up against all of these little rough edges, and you just can’t help but feel a bit sore after a while. There’s not enough game here to justify its $40 asking price, and all of the supplementary stuff that’s meant to help add value contain perhaps the roughest edges of them all. At best, cross your fingers and hope they remaster a better Monkey Ball game next.

I really want to know why they chose to remaster this game first.

Inside The Pages: Sonic Boom #1