A snapshot of turmoil

Prototype games are always super fun, especially older ones, who contain mysteries that may never be answered. We had several mysteries linked to the development of the original Sonic the Hedgehog and Sonic 2, everything from earlier design concepts (Sonic’s human girlfriend, “Madonna”) to lost levels (Sonic 2’s infamous Hidden Palace Zone).

But not so much surrounding Sonic 3. As far as anyone could tell from the outside, that appeared on store shelves relatively unscathed. Yesterday afternoon, Hidden Palace closed out their “Sonic Month” by releasing their final prototype, this time for Sonic the Hedgehog 3, and it paints a very interesting picture of what was going on behind the scenes.

The cliffnotes version is this: there were no known mysteries surrounding Sonic 3’s release because Sega very tightly controlled what the press was allowed to see and talk about. Behind closed doors, Sonic 3 was on fire — and not “on fire” in the sense that it was an amazing, awesome game, but on fire in the sense that it was a wreck. Sonic Team had spent five months working on a fully 3D version of Sonic 3 using the new “SVP” chip (Sega’s answer to Nintendo’s Super FX chip), but that version had to be scrapped, forcing them to start over from scratch on a more traditional sequel. The rub? Sonic the Hedgehog 3 had to be on store shelves by February of 1994, meaning they had to submit the final version by November so that enough cartridges could be manufactured in time for the game’s launch.

That February ’94 deadline was immovable, as Sega had struck a marketing deal with the McDonalds fast food chain to include Sonic 3 toys in their Happy Meals. Something had to be on store shelves called Sonic 3 by February 24th, and it was already June of 1993 at this point. Even back then, games often had the luxury of at least one year’s worth of development behind them, but Sonic 3 had to be put together in less than half that time. As such, the prototype build released by Hidden Palace shows a game very much in a state of flux. Though much of its content is familiar, nearly all of it is different in some way. And this is from a build made in October of 1993, mere weeks away from the finalization deadline.

There’s a gigantic, ever-growing list of differences on both Hidden Palace and The Cutting Room Floor, but the most dramatic differences include changes to graphics, music, and character abilities. Sonic and Tails still use their Sonic 2 sprites, though one gets the impression they’re being prepared for their new Sonic 3 sprites, as they frequently revert to the wrong animations for certain things (as if the code is pointing to something that doesn’t exist yet). Knuckles, in his brief appearances, looks totally different, with a sprite that’s at times almost reminiscent of his Sonic Mania sprites. 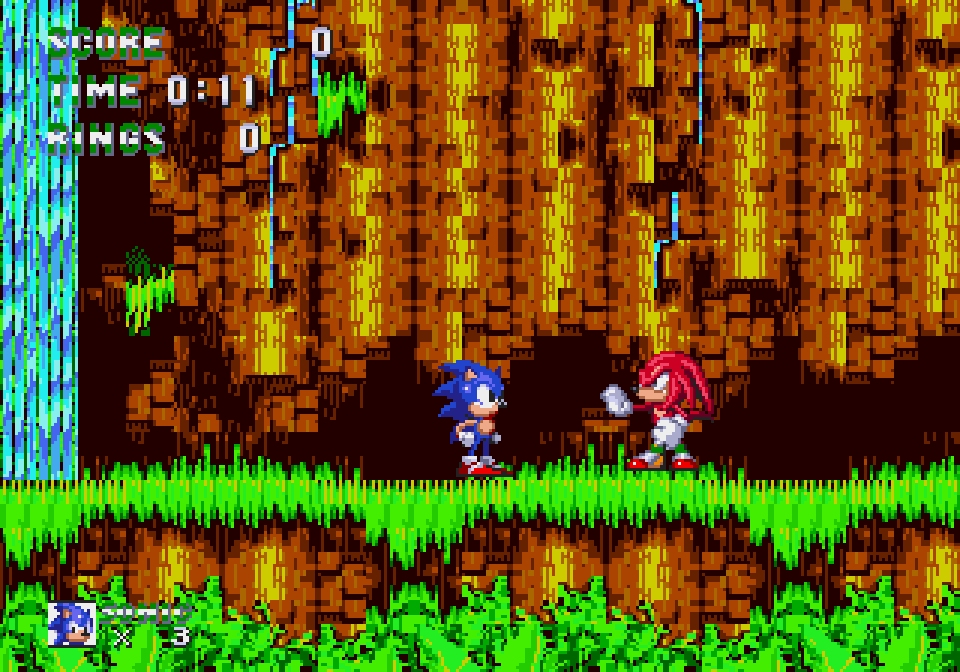 Most levels feature graphical differences or layout changes, but in particular, this build still contains levels that would be split off to form Sonic & Knuckles for October of 1994. Though both Sandopolis and Mushroom Valley cannot be loaded, what’s present of Flying Battery Zone shows a level that barely exists, as there are no rings, enemies, and significant portions of the level graphics are filled in with blank placeholders. Also buried within the data is a very early version of Lava Reef Zone, featuring a blue and gray color scheme.

At this stage of development, character abilities were still being figured out. Tails can fly, even airlift Sonic, and does not get tired from doing so. Elemental shields have only their most basic functionality, essentially working like the standard Sonic 2 shield. Sonic’s abilities are where things get interesting. This build of Sonic 3 does not yet feature the “InstaShield.” In its place, Sonic actually features a rudimentary version of the Drop Dash.

Yes, you read that right. This 1993 build of Sonic the Hedgehog 3 features a move from 2017’s Sonic Mania. It’s not a programming mistake, either; the game looks for a specific input (up + jump button) while Sonic is in the air, and if true, sets the spindash state. Though the conditions are a bit different, that’s pretty much the Drop Dash. Fans have already taken to asking Christian Whitehead whether or not he knew about this and included it in Sonic Mania as a tribute, and by all accounts it sounds like it was a happy coincidence. Both teams merely happened upon the same idea at different times. For Sonic 3, it was discarded in favor of elemental shield abilities, whereas in Sonic Mania, it became a core part of Sonic’s move set.

this Sonic 3 prototype just… has the Drop Dash pic.twitter.com/Gp21CxC776

Sonic has other moves, as well. As Super Sonic, you can throw out a ring to attack enemies, and a multi-directional air dash has been discovered buried in the code, similar to what Hyper Sonic has in the final version of Sonic 3 & Knuckles.

But the most juicy parts of this prototype come from its music. One of the only public-facing mysteries surrounding Sonic 3 was how involved Michael Jackson was in the production of its soundtrack. This prototype only deepens that mystery further, as it does not feature any of the purported Michael Jackson songs at all, with only weeks until the game’s finalization. For levels like Carnival Night Zone, Ice Cap Zone, and Launch Base Zone, we get… music from the PC version of Sonic & Knuckles Collection. The implications of this are incredible — whereas once we considered the Sonic & Knuckles Collection soundtrack to be made up of hastily-assembled replacements, those were in fact Sonic 3 prototype songs all along and we never knew it until now. Mind blown.

A full list of all the changes and differences (and there’s tons!) can be found by either checking the Hidden Palace Wiki, or The Cutting Room Floor. And don’t just check them once, as this will undoubtedly be something that continues to give more discoveries in the days and weeks to come.

Now, whatever happened to the original version of Sonic 3 developed for the SVP chip, I wonder…?