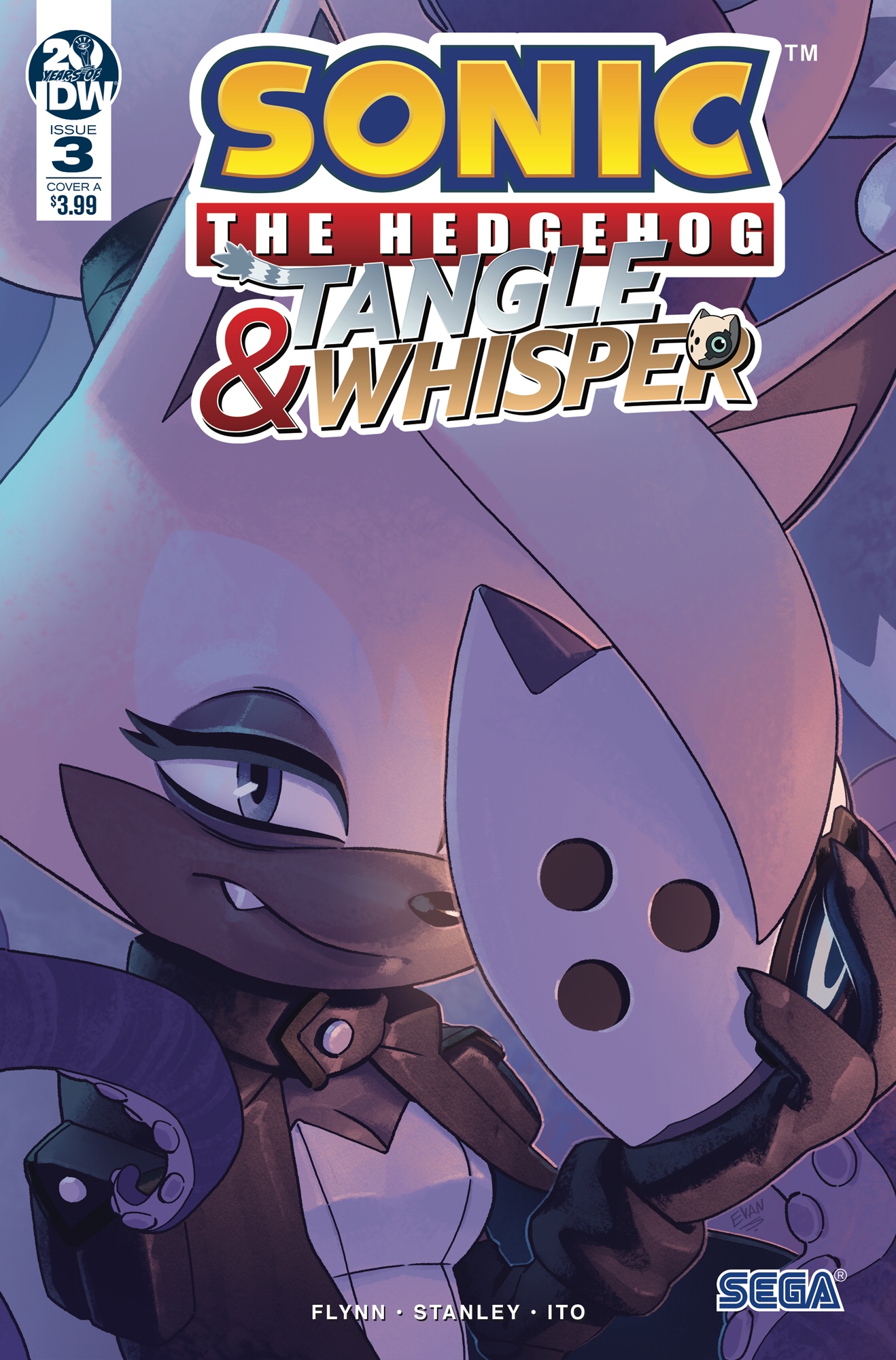 Happy New Year everyone! I hope everyone’s festivities were safe and enjoyable. On a personal note I apologize for the delay in getting this out, I have had family in town and have been busy everyday they’ve been here so I’ve had no time to write the rest of these reviews. But I am back now, so onward we go!

Whisper is finally disclosing her past to Tangle and why Mimic has done what he’s done thus far. Whisper was a part of a team of five anti-Eggman mercenaries called The Diamond Cutters. Whisper hands off her mask to Tangle so she can watch the footage back herself. The video shows the team infiltrating what was presumably an Eggman base. All was going well with the team, communication was on point, and they were able to destroy the base with no problems at all. Whisper explains that Smithy, the team’s craftsman, made their masks and their wispons so everyone could act as one person, right down to communicating with the wisps.

Whisper, unable to vocally say what happened to her team, hands her mask back to Tangle and shows her the archived footage of what happened. It shows a meeting back during the events of Forces (it looks like, at least). Mimic is explaining an operation requiring all hands on deck and on the ground for the invasion. Clairvoyance, the teams psychic, has an uneasy feeling about the mission and airs her concerns to Whisper. Both brush it off and decide to listen to Mimic and just be careful.

In the base, the team is uneasy indeed as there’s no life signs around, and by this point the team expects Eggman to have adapted to their attacks. Clairvoyance can’t get a read on the situation, claiming that Eggman must be projecting Alpha Waves, which apparently block her psychic abilities. While searching for what’s causing the disruption, they find Shadow Androids. A Shadow Android attacks the team, dealing them in the facility. The team calls out to Whisper and Mimic for aid, but neither can hear them.

The scene cuts to Eggman in his base talking to Mimic, and it’s revealed Mimic double crossed the team and gave them to Eggman for him to take out. Given that Eggman was taking over the world at this point, Mimic wanted to be on “the winning side”. Eggman pardons Mimic but discovers that Whisper wasn’t taken out in the attack. He orders Mimic to finish the job. He goes to where Whisper was set up, but can’t find her and decides to turn his mask and wispon in as proof of her death.

Tangle takes the mask off and asks why Whisper never got rid of the footage. Whisper doesn’t want to forget, and won’t ever forgive what Mimic did to her and her team. She took their wisps from their wispons and went on alone, mentioning some trouble fighting alongside Shadow in the last IDW Sonic arc. After some discussion about why Whisper is protective of Tangle and wanted to leave her behind (Tangle is the only friend Whispers allowed herself to make since Mimic’s betrayal), the duo head off to take the fight to Mimic. Well, at least lead him into a trap where it all started.

Right, so I was excited reading this because I wanted to know Whisper’s mysterious backstory and why she is the way she is. And it makes sense that she be that way if she lost her whole team to Mimic’s betrayal. However, I do feel like the way it was done was predictable, insofar as Mimic leading her team into a trap. I wish that it was done in a different way, because that trope has been done so many times I wanted Whisper to have a more unique backstory of how her team died. That said, even though I wasn’t happy with the way it happened, I did like the way it was written. The fact it was shown to us through Whisper’s mask and not just her telling us was incredible and creative. I think that makes up for the way the betrayal was done. I also liked the personalities we got to see with Whisper’s teammates, that was awesome as well. Each had a unique personality that seemed well thought out even though this would be the only comic they really showed up in.

As far as the art, I have nothing unique to say about it. The art style for this miniseries has remained the same, and this comic isn’t different so anything I say would just be me repeating myself again. What I will say is the way that the mask videos were drawn was good and made sense. Each video was labeled with who’s mask footage was playing, so has to keep any confusion from cropping up. That was a nice touch. I also liked the Diamond Cutters’ character designs.

All in all this was a solid comic. What was underwhelming at some points was made up in with how those underwhelming pints were presented. What’d you all think of the comic? Tomorrow we finish off the individual comic reviews with Issue Four and the day after that we look at how the series as a whole worked together between each comic.