A little bit of Ninja magic

For many years, I assumed that I had played the arcade version of Shinobi before, and came away feeling lukewarm. Sega Ages has proven me wrong, making me realize I had conflated it with another ninja-based arcade game that was released around the same time: Tecmo’s Ninja Gaiden. And if you’ve played the arcade version of Ninja Gaiden, you’ll know that it’s kind of a weird game — completely unlike the the home console versions of Ninja Gaiden, and very different from any version of Shinobi we received from Sega.

This made the Sega Ages version here a pleasant surprise, like a hidden gem hiding in plain sight. For most of my life I’ve operated under the assumption that Shinobi III on the Sega Genesis was the pinnacle of this franchise, and while I still believe that, Arcade Shinobi is so much closer to the console versions of Shinobi than I ever dreamed. Though in hindsight, I should have expected this. 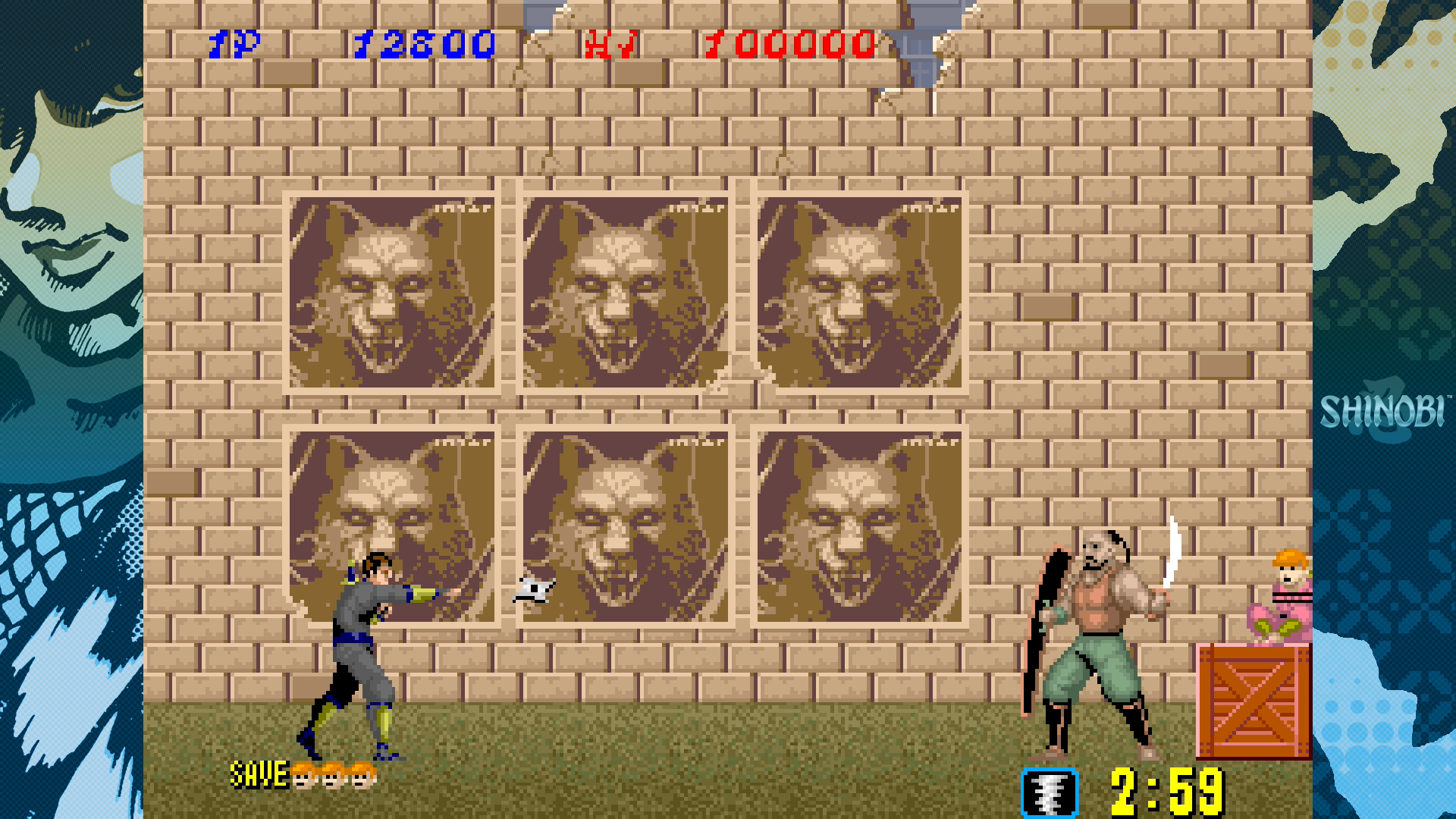 Games were in a weird place back then. Take Capcom’s Ghouls n’ Ghosts for example, or SNK’s Ikari Warriors, both of which ended up very different on the NES compared to their arcade originals. More dramatic changes happened to the NES conversions of Rygar and Strider, which barely resemble their quarter-munching forebears. Home console hardware was so different compared to what was possible in the arcades that it wasn’t easy to get the coin-op experience at home, necessitating changes that were often significant.

Or, at least, that’s what Nintendo thought. Before the debatable benefits of “blast processing,” Sega’s greatest strength early in the 1990s was boasting the ability to bring the arcade home. Strider on the NES was closer to something like the exploration-focused Metroid, whereas the Genesis version attempted something closer to its action coin-op big brother. When it came to Sega’s own games, the 16-bit home conversions of games like Altered Beast were, as advertised, practically identical to the arcades. With Golden Axe, this lead to some arcade games developing into console-exclusive franchises, where future sequels stayed at home.

Such was the case with Shinobi. It was the beginning of what would become a long running and beloved console game franchise spanning the Sega Master System, Genesis, Saturn, and Playstation 2. The most striking thing here is just how little of this game actually feels like it belongs in the arcade. There’s usually a certain kind of feeling you get from arcade games. A simplicity of concept paired with an extreme level of difficulty. Something that’s dead easy to pick up but will probably cost you several dollars in tokens in order to finish. That’s kind of true of Shinobi, but only to a point. Mostly, it just feels like a game that could have been released on the Sega Genesis, as-is, and nobody would have thought it was anything less.

I don’t even mean that in the context of Sega’s other home conversions, either. There’s something about Shinobi that feels intrinsically more like a home console game than Golden Axe or Altered Beast. That mostly has to do with it being more of a shooter than anything else. The simple depth of most arcade action games lends itself perfectly to shooters, where positioning is everything — both to dodge incoming fire and line up your own shots. No matter the platform, Shinobi feels right at home in a game where having ninja-like aim and precision is a defining factor.

M2’s porting work is, as always, top shelf. The crunchy, metallic FM synthesizer sound you know from the Sega Genesis is in full effect here, preserved wonderfully. Visuals are sharp, though M2 has gone the extra mile with multiple types of filters and resizing options if that’s what you want. You can have scanlines, soften pixel edges, simulate an old television, and there’s even a special border + filter display mode that puts the game inside of an on-screen arcade cabinet, complete with ambient sounds of other Sega arcade classics playing in the background. It’s a cute novelty and shows the amount of love M2 has for these games.

If you do find Shinobi a little too difficult, new to this version is a special “AGES Mode”, which increases Joe Mushashi’s health and gives you the fully-powered shuriken attack at all times. Though the original arcade version of Shinobi already feels like a console game, AGES Mode nudges the gameplay a little closer to Revenge of Shinobi on the Genesis. Also included are a myriad of options to tweak the game’s difficulty, too, if you really want to soften things up, plus save states and the ability to rewind gameplay. You even get to remap the controls and turn on a rapid-fire mode (or even dedicate an entire button to Shinobi’s melee attack). 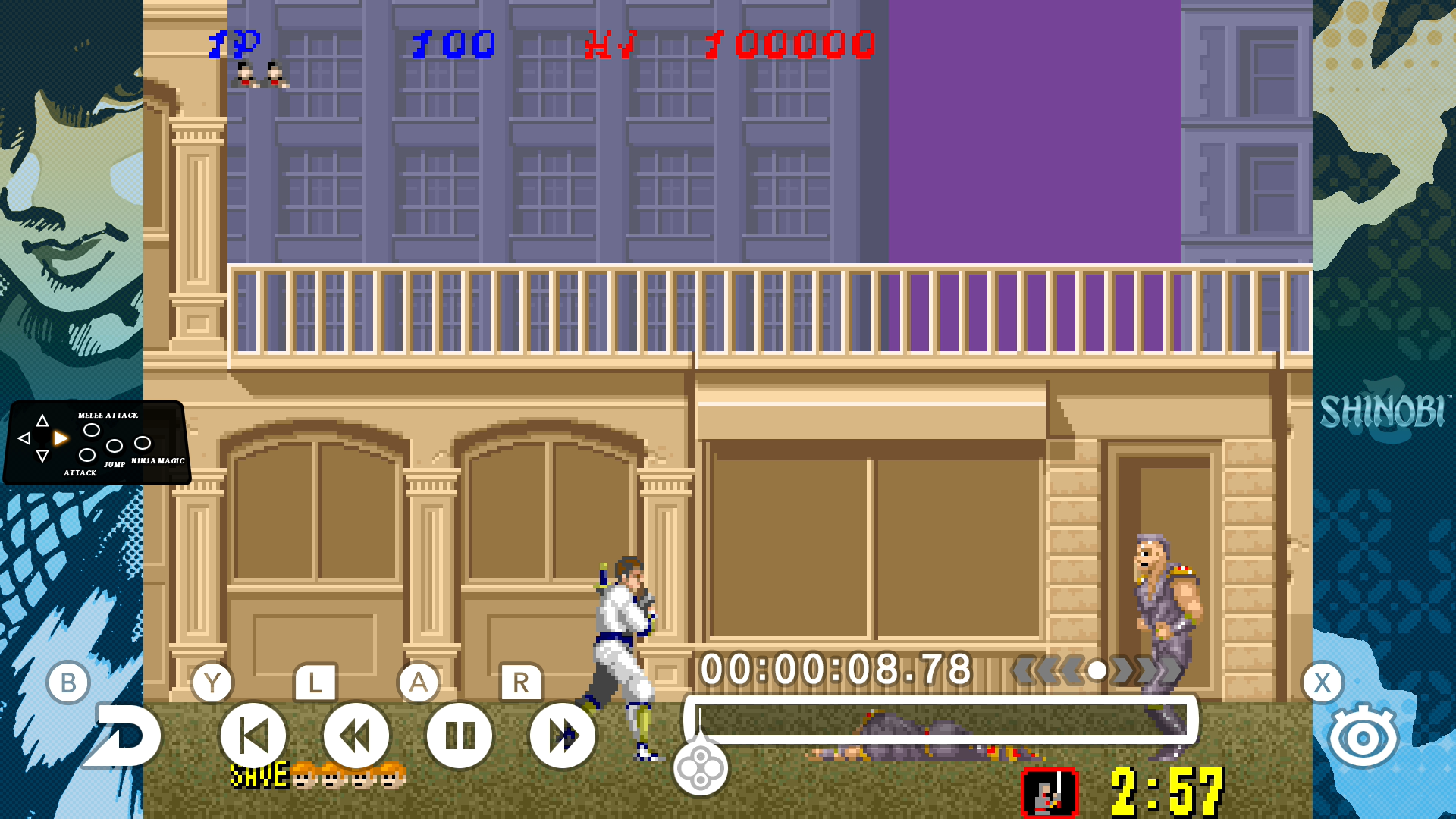 Watching a top-player’s replay from the leaderboard can be enlightening.

It’s a pretty robust package, all told. Even though I still think Shinobi III is the best this franchise has to offer, I came away from the arcade version of the original Shinobi surprisingly delighted. I’m willing to bet there are a lot more people out there who are in a similar position as I was, having never played or even seen this game before. With so many settings, plus two different gameplay modes, and online leaderboards (yes, it has those, too), this is a pretty decent way to spend $9. If you’ve never played it before, it’s new to you, and in the case of this game, I found something new to appreciate.

Final Score
4out of 5

How an FTC Decision Could Impact Gaming News