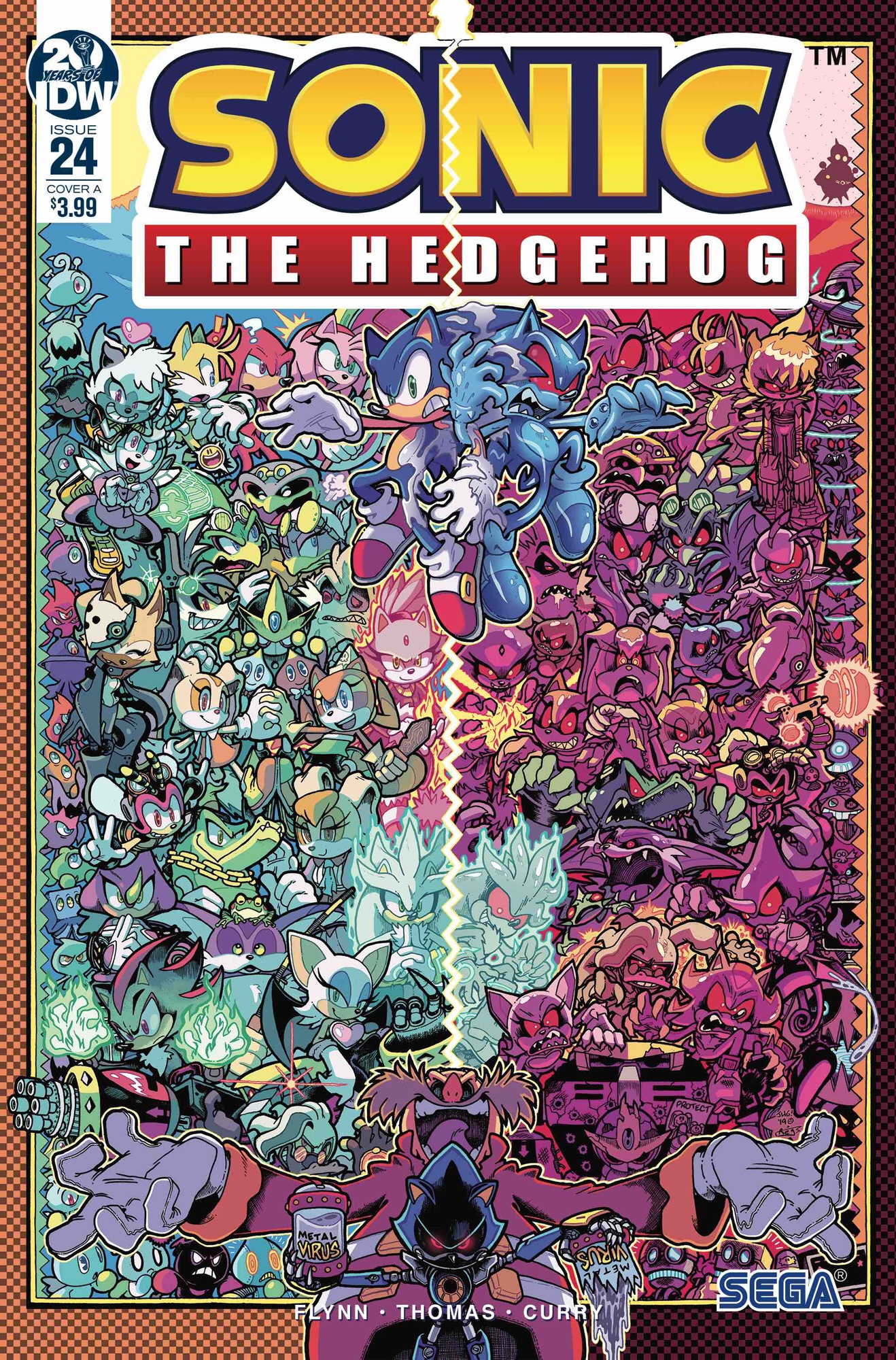 Better late than never! Before I start on the review I want to apologize for the long delay. I had a super busy holiday, then I started school and my professor dropped a huge project on us the first day, I’m only just now able to sit and write this. Thank you for waiting patiently, now let’s get in with the review.

Sonic has come up to Spiral Hill, Tangle’s hometown, as evacuations are underway due to a Zombot attack. He helps out Espio, who fills him in on what he’s missed (Restoration falling, Vector being infected, so on). Though Espio blames himself for Vector and what happened to Restoration HQ, he ultimately lays blame on Sonic for not letting anyone harm Eggman back when he was Mr. Tinker. Sonic, being the guy who wants to see the good in everyone, stands by his decision to keep giving second chances.

After the two quarrel, Sonic goes to find Amy who explains their plan to evacuate the town. Sonic agrees, Tails and Cream show up and say hi (well, Tails says hi, Cream looks dead inside and gives an angry “H’lo Mr. Sonic” without even looking at Sonic). Sonic has to inform Tails he busted the data recorder in a spat with Eggman and Starline (this happened last issue), and Tails tries to act bravely but is incredibly upset their only chance at fighting the virus is busted. Sonic races off to help Tangle with the evacuation efforts, and as he leaves Gemerl informs Amy that Sonic’s speed isn’t effective enough against the virus to stop him from turning full Zombot.

Sonic meets up with Tangle and helps her fight off a few bots. The two formulate a plan to keep the Zombots away from the evac ship, but there’s a catch: to execute it Sonic would infect Tangle. It’s here that it’s revealed that Tangle has been infected for awhile, thanks to her having checked on Jewel when she got to town. Tangle and Sonic have a heart to heart on how he’s supposed to keep being the good guy, and he’s not to blame for everything that’s happened so far, despite everyone doing so. They execute the plan, and say goodbye, with a tearful Tangle asking Sonic to say bye to Whisper for her. Sonic agrees and runs off.

When he gets to the evac ship, he explains what happened to Tangle, and Whisper has a complete meltdown (not unsurprising, her only friend in the world basically just died). And the evac ship flies off. We’re left with Starline basically staging a coup against Eggman with the Deadly Six.

Wow, I was expecting dark given the plot of this arc so far, but I wasn’t expecting that dark. I did my best to avoid spoilers for this one, (I literally hadn’t even touched my comic until today due to time), but I did know that this was one of the darker comics due to the fan reactions I saw online. I definitely was not let down in that expectation.

I really enjoyed the writing, more so than normal. I love seeing heroes fall and have to get back up, which was what happened in this comic. Sonic’s friends completely and wholly blamed him for the epidemic and not being able to fix it, and Sonic had already begun blaming himself. He’s always been the guy to save the day, and now all of his friends are dying around him and he can’t fix it. That’s gotta do some damage to a person. Tangle did well to encourage him to keep moving forward, even as she was overcome by the illness, she said she’d wait for him and he better come help her. She believes in him and no one else does. I love how this was conveyed, and coupled with the art for this issue? This is one of my favorite issues this plot arc. Cream’s dead eyed angry look when she walked by Sonic, Whisper pleading for Tangle to come back and having to be held back by Amy, her weeping into Cream’s lap, all add together into showing how desolate and heartbreaking the world has become thanks to Starline and Eggman. I love this comic and I’m glad I was finally able to get around to reading it and reviewing it for you guys.

As for next comic’s prediction? Sonic is going to be overcome by the Zombot epidemic, there’s no question. It was already hinted at in this issue so that’s the logical next step. Issue 25 had been delayed until I believe February 12, so we will see then.

What’d you all think of the comic?

Sega on Track to Make A Profit

Spencer Nilsen to Chat at SAGE