Hard was never so soft

I have a poor relationship with space shooters. My earliest memories were of playing a friend’s copy of Gradius III on the SNES in the early 1990’s. But those are just memories; I can distinctly remember seeing Gradius III then, and thinking to myself, “I’d hate this game.” Somehow, in spite of that, I came to own Gradius III just a few years later. True to that initial assumption, it made me furious. Konami back then specialized in extremely difficult games, some of the most difficult in the industry, and Gradius III was no different. It even took the now-famous Konami code and transformed it into a cheat that made your ship instantly explode.

This colored all future interactions I had with the shooter genre. Darius? Raiden? Thunderforce? Ikaruga? I had little patience for them. Even kinder, more gentle shooters like Twinbee and Parodius were a struggle. From my point of view, the entire genre was created by, and for, masochists.

This isn’t the moment where I tell you that Fantasy Zone is different. I mean, it kind of is, because it’s got more in common with something like Defender as opposed to, I dunno, Radiant Silvergun or something. But it’s still a space shooter, and that means it’s something I have a hard time wrapping my head around. 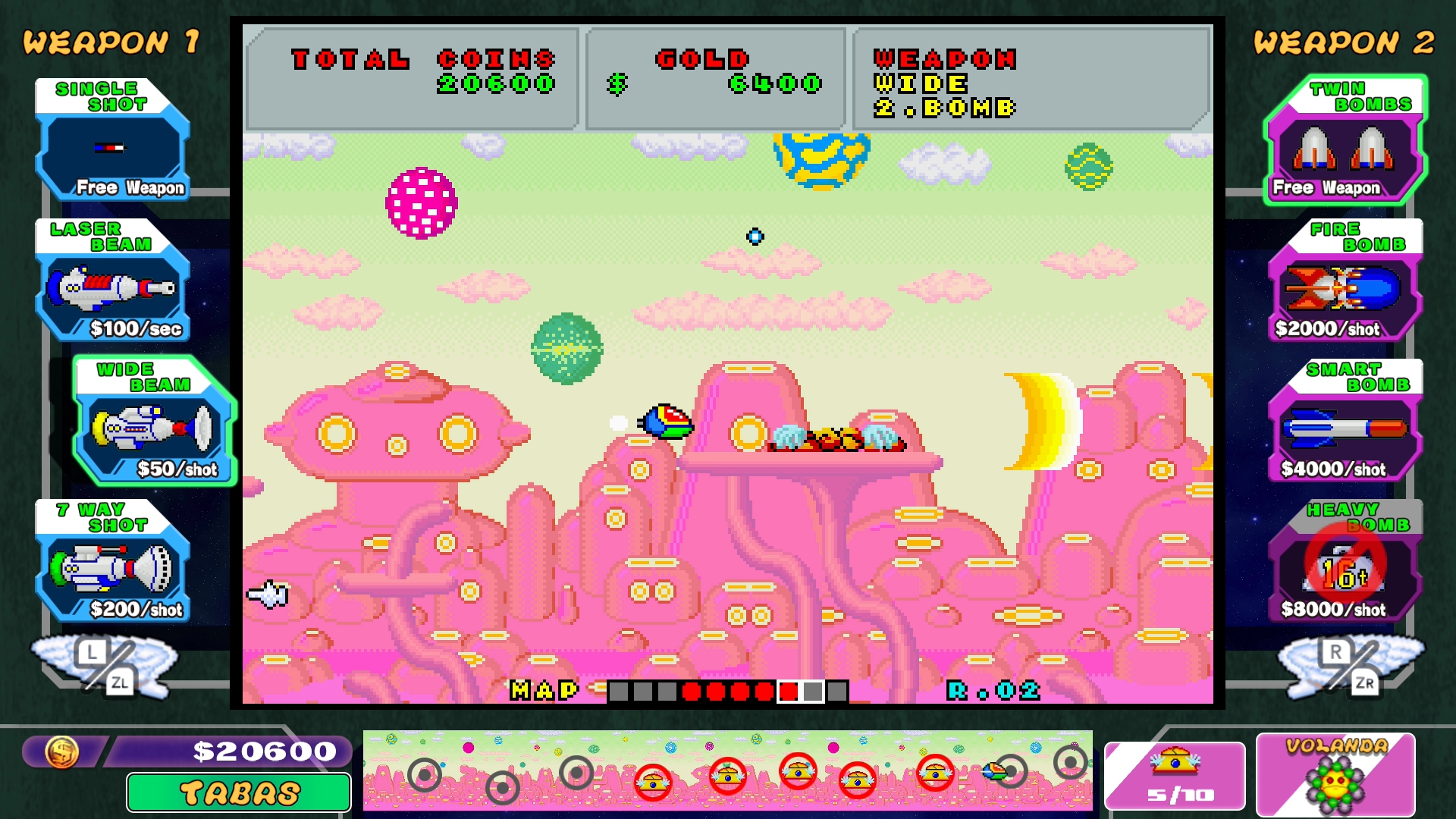 M2’s been on a roll adding new modes to these old games.

In some ways, this is what being a critic is all about. You’ll eventually have to talk about a game that is completely outside of your wheelhouse. Writing about what you know is a luxury you don’t always get. Am I just filling for time here? Kind of, but it’s also the truth, and I want you to understand where I’m coming from. This is the job.

For me, it’s shot patterns that mess me up so bad. Shooters are all about dividing your attention — what’s shooting you, where the shots are going, how close bullets are to your ship, what new patterns of enemies are scrolling on screen, and how you reach power-ups. It’s like navigating five different mazes simultaneously from one input, and touching the edge of anything will probably kill you.

Fantasy Zone is a little more forgiving about this. There’s still a lot of ways to split your attention, but it keeps levels simple and clutter-free. You only really have to worry about enemies, enemy bullets, and money.

The way the flow of gameplay goes, you fly around a looping arena destroying enemy motherships while dodging increasingly aggressive waves of enemies. Once all the motherships are destroyed, that planet’s boss descends. Kill the boss, move on to the next planet, and do it all over again. Enemy variety is surprisingly large for this type of game, as any planet may contain 3-5 different ships, each with different flight patterns. The longer you hang around, the more enemies begin to spawn, so it’s in your best interest to take down all of the motherships quickly. 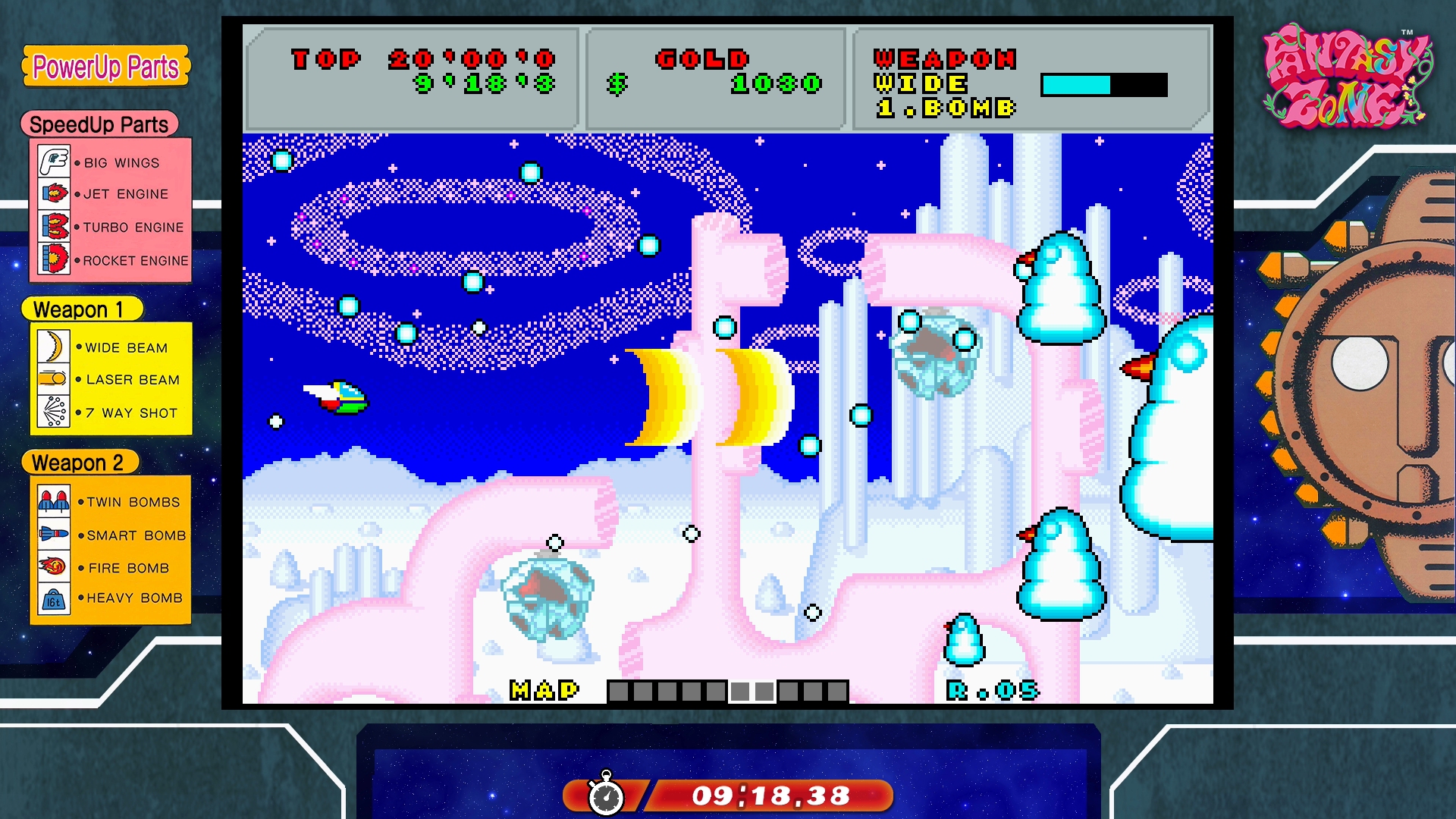 Fantasy Zone isn’t so hard at first, but really things ramp up later on.

Helping you do this is the shop, which mostly only appears at the start of a stage. Defeated enemies (and bosses) drop money, which can be used to increase your ship’s movement speed, upgrade guns, or get bigger bombs to drop. The thing is, a lot of those upgrades are temporary. As far as I can tell, there’s no way to “save up” for an important fight, so you mainly spend money on upgrades for the start of a stage, where having all that firepower doesn’t matter, and by the time you reach the boss, you’re back down to your basic stuff again. It almost feels like you’re better off ignoring the shop entirely and learning to get good with the basics, because none of the upgrades will help you when you need them most.

Much like Sega Ages Shinobi, Fantasy Zone comes with an all-new alternate mode of play. Here, you get “Upa-Upa Mode,” counter-balance to the “Original Mode,” which is the default. Upa is a higher-stakes, higher-reward mode, where the player has access to all power-ups, selectable by pushing the trigger buttons. The twist is that money is your ammunition, and the more powerful the weapon, the more cash it takes to shoot. Sure, you might be able to pick the strongest weapon in the game and roast a boss, but you’ll also be setting fire to your bank account, too. As a result, enemy density has been increased considerably in order to increase the drop rate of money, making the mode overall more difficult than the default.

A third mode has also been added to this release: a simple time trial mode, where you’re given infinite lives, but the prices of many shop items have been increased considerably. It really emphasizes the idea that you shouldn’t be wasting your time on buying most upgrades. This also ends up being one of the best modes to play Fantasy Zone in for someone like me, because it means you can just grind out your failure until you reach the end of the game. 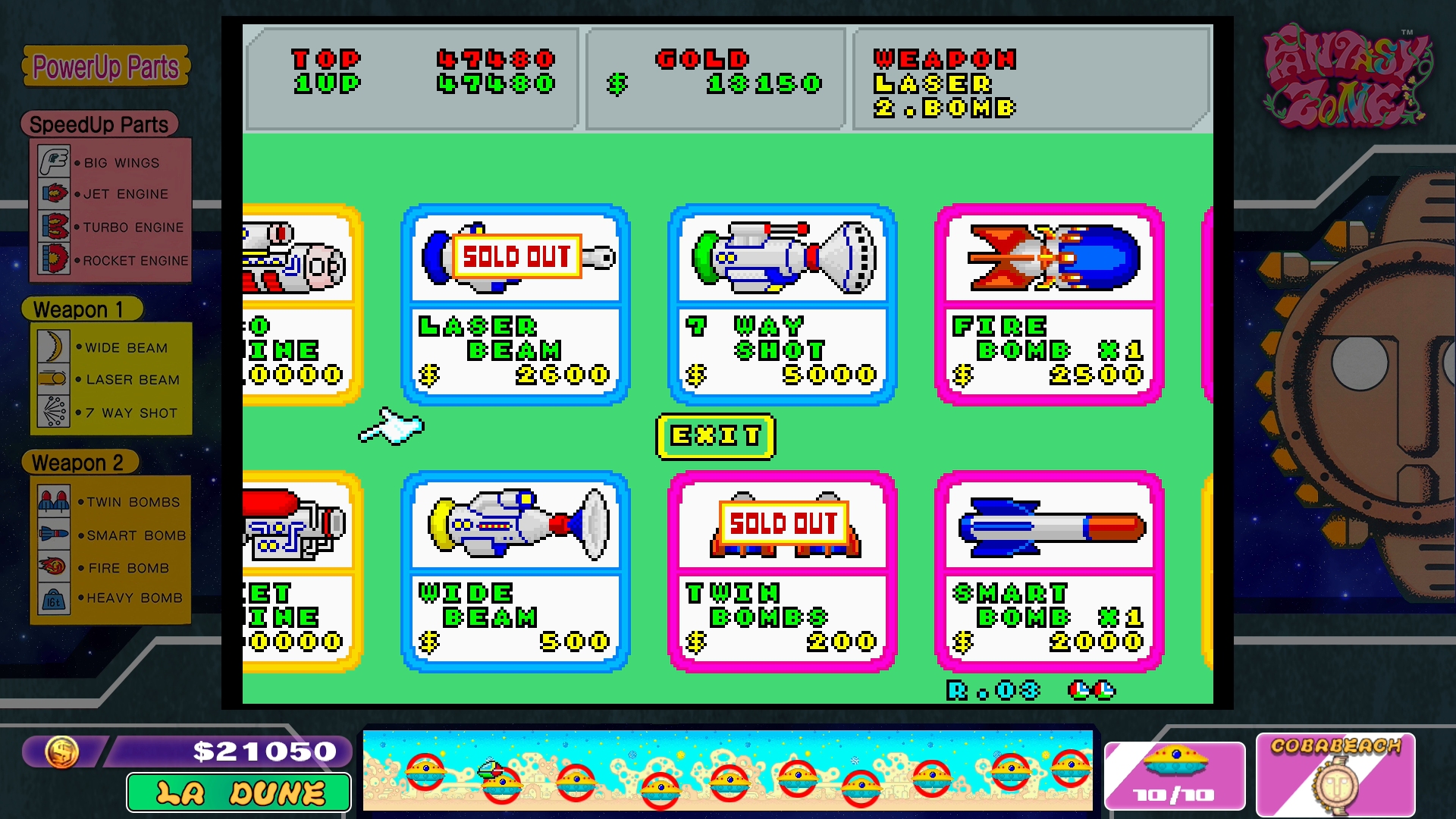 You’re better off saving your money at shops.

Just like with all the Sega Ages releases, Fantasy Zone is well represented. All of the visuals and audio are preserved accurately, with many of the same options seen in Shinobi: there are plenty of graphical options for smoothing, scanlines, and applying a TV filter. Shinobi’s arcade cabinet view is missing, but only sort of — in its place, a new view mimics Fantasy Zone’s sit-down cocktail cabinet. Also unlike Shinobi, parts of Fantasy Zone’s cabinet have been worked in to the border artwork here, and a brand new radar tells you the general location of all the motherships on each planet. Levels aren’t necessarily complex enough to warrant a radar, but every little bit helps, I guess.

With a game like this, there’s always the worry deep in the back of my mind that I’m not playing it right. That there’s a secret I’m missing where the game will suddenly click into place, and I’ll see the magic. Truthfully, I don’t think that’ll happen. Not all games have to be for all people, and it’s not the end of the world if I’m a little lukewarm Fantasy Zone. Just the same, it’s the kind of game I can respect on a conceptual level. I may not enjoy a game like Fantasy Zone, but I don’t hate it, either. I can see the appeal of this oddball art style, and these cute, strange characters. There’s nothing else out there like Fantasy Zone, not now, and maybe not ever. That counts for something, and if you’re the type to like space shooters, you’ll probably find something of interest here.

Stellar work from M2 as always, I just wish I was better at it.