And the dance party don’t stop

Bayonetta is a strange game, and it only gets stranger as time goes on. Though it’s not Platinum’s first game, it may as well be for the mark it left on the industry (sorry, MadWorld). Ten years on, you should know by now that Bayonetta is a fantastic action game — still in a class of its own after all this time. Not only one of Platinum’s best games, but one of the industry’s best action games, period. 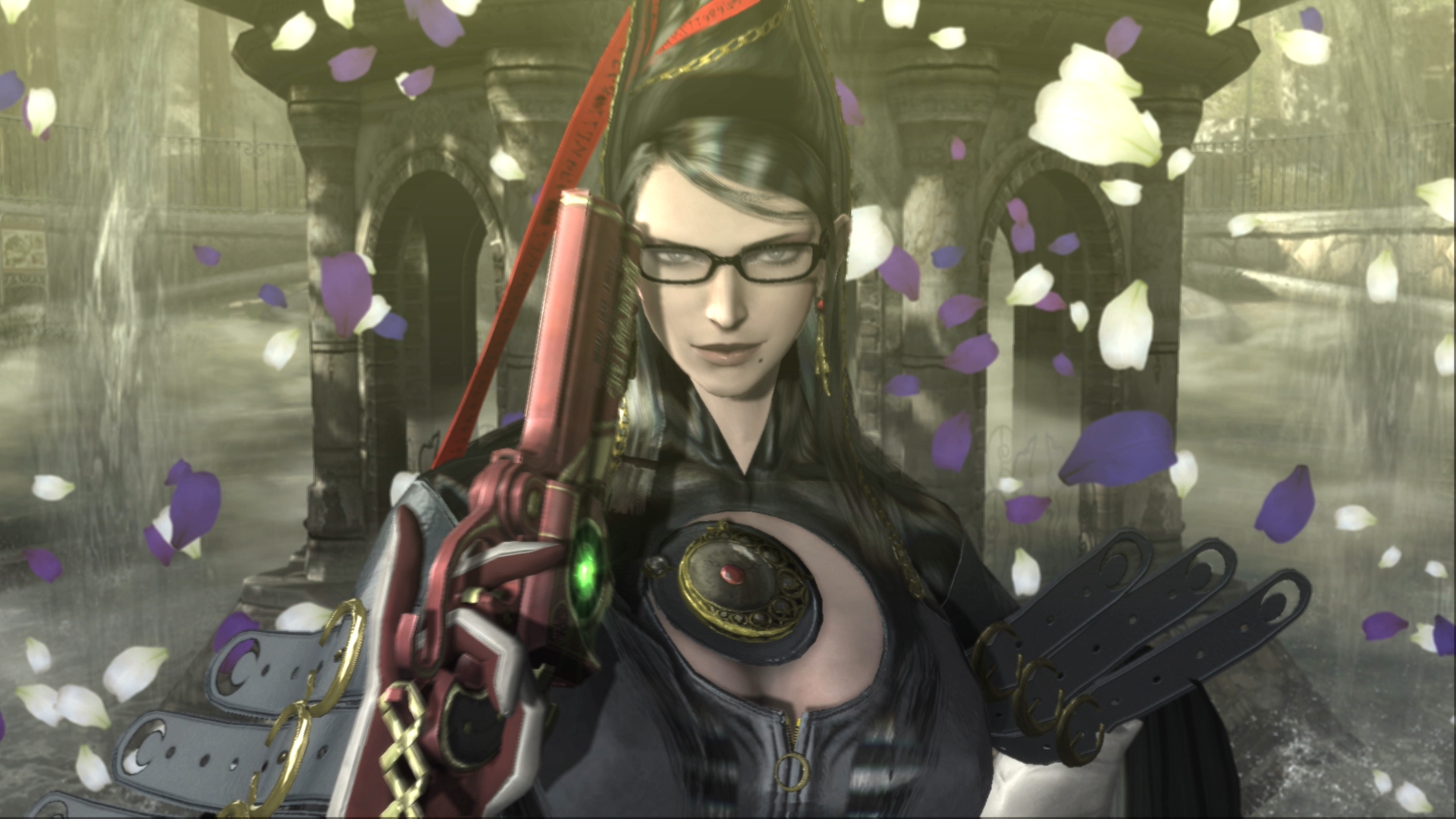 Bayonetta is a lot of things.

You can’t talk about Bayonetta without first talking about her character design. Sexualization in character design is a weird topic for me; I think it’s fair to say most people enjoy titillating outfits on some level, but there’s a line to be walked. Sexualized characters can quickly feel like the laziest, easiest form of manipulative marketing — another selling point in a world choked with advertisements. I survived the era of deceptive “Play now, my lord” banner ads, and it turned me into the sort of person who despises cheap sex appeal. That kind of sexualized marketing is nothing more than a lie to grab your attention, and in doing so, it feels like an attack on my intelligence. Sexuality is fine! Using sex as a gimmick to trick people in to wasting their time or money is not, and I’d argue that most mainstream sex appeal is in service of that gimmick.

One could put Bayonetta herself into that same camp, given she ticks all of the boxes: a skin-tight bodysuit, librarian glasses, and a sultry British accent. On the surface, she seems to be from the same camp as those Kate Upton “Game of War” mobile game advertisements. But for the character to have real lasting appeal, there has to be more to her. To me, Bayonetta’s sex appeal has always felt more like a joke; there’s such an extreme focus on the T&A of her character design that it breaks. It’s the same as repeating a word so many times that it loses all of its meaning. Bayonetta is so hyper-sexualized that she actually isn’t. Any time the game camera makes a point to show her body, it only highlights how comical it all feels. A clown wearing two red noses, one over the top of the other. It’s basically a parody — albeit one you still probably won’t want to play in mixed company.

It helps that the sex appeal isn’t really a gimmick, either. Bayonetta’s gameplay is immaculate, empowering her beyond merely a piece of eye candy. This is a game from some of the minds that brought us Capcom’s Devil May Cry, and Bayonetta is an improvement in almost every conceivable way. For me, it’s the fact that Bayonetta starts out fully equipped with dozens of combat abilities. Whereas a game like Devil May Cry 3 would start you out with only a few basic sword strikes, Bayonetta has a wide array of punches, kicks, wicked weave magic and torture attacks that can be chained together to keep movement feeling fresh and varied. On top of that, you can purchase even more attacks, weapons and abilities from The Gates of Hell shop, furthering Bayonetta’s mobility during combat. 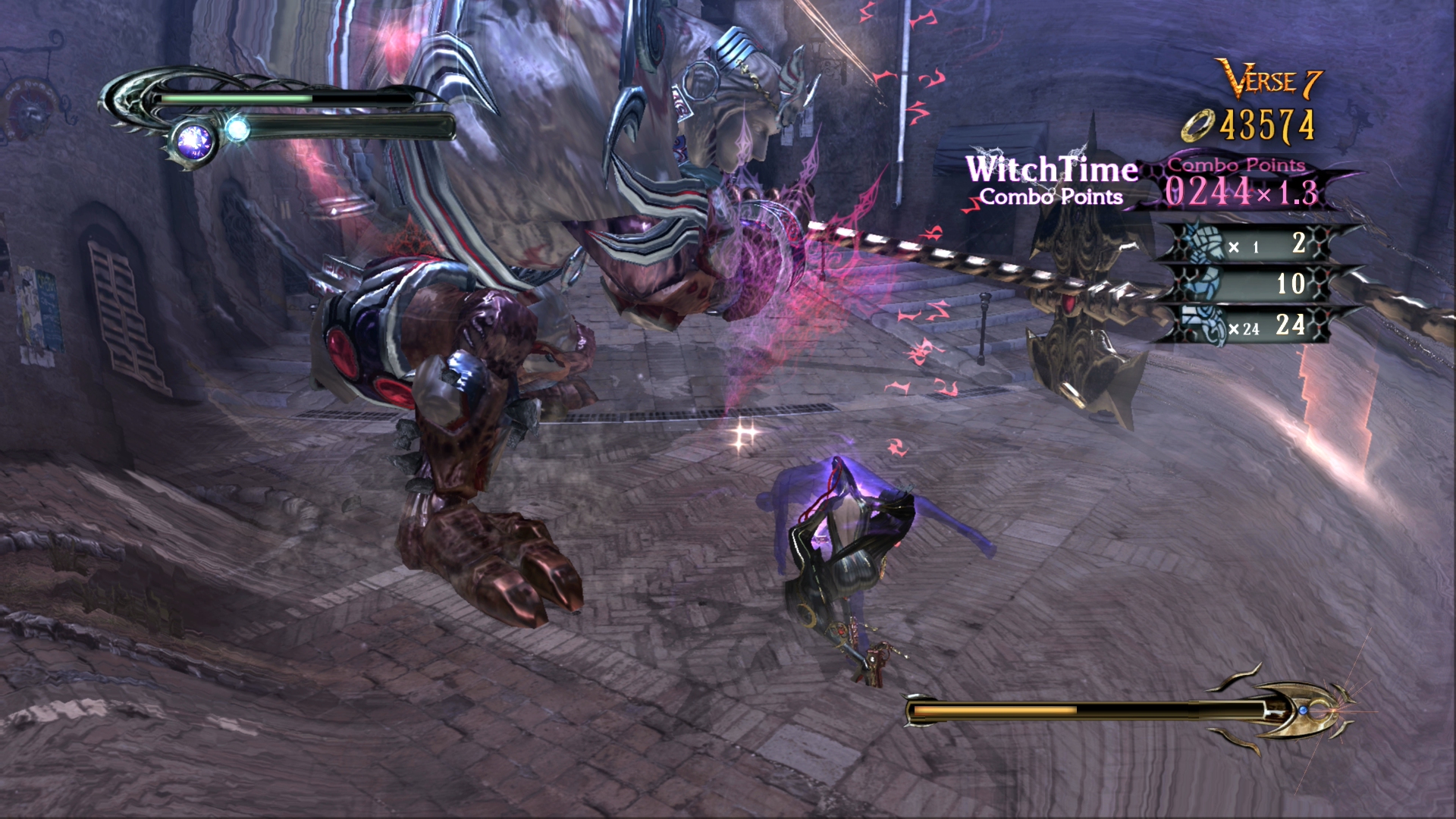 Witch Time is what makes the game what it is.

The real magic, and the thing that solidifies Bayonetta as such an undeniable action game classic, is her Witch Time ability. By waiting to dodge until the moment before an enemy strikes, you can drop the world into slow motion, setting you up to dish out payback in spades. This last-second-dodge-then-counter rhythm has since become a cornerstone of many of Platinum’s combat systems, and has even begun finding its way into other, similar games — like 2018’s God of War, where (as I understand) Kratos can eventually unlock a way to stun enemies by dodging just before they hit. It’s the sort of thing that always feels good every time you do it, a “gotcha!” moment that will never get old, and everything in Bayonetta orbits around it to great effect.

In the years since its release, there has been some debate over whether or not Bayonetta 2 (our review) is actually better than the original. Bayonetta 2 seemed to have been part of a concerted effort to make Platinum’s games more accessible to the mainstream by bringing down complexity while staying true to what “feels good” about a given game. Among Bayonetta’s most dedicated fans, that means they often view the first game as the pinnacle of this combat system, given the game’s significantly higher skill ceiling. In other words, as you keep getting better at Bayonetta, the game keeps accommodating that by revealing new layers of depth to master. In contrast, Bayonetta 2 simplifies monster attack patterns while introducing a new “Umbran Climax” super move to let you tear through large groups of enemies (or bosses) more quickly, allowing you to mash your way through fights without thinking so hard about intricate combo mechanics. For the average player, you may not even notice a difference, though it does mean Bayonetta 1 is a harder game to clear than 2.

But then that could also be used to describe the differences between Bayonetta and Devil May Cry. Bayonetta may give you greater move variety to work with, but that just means enemies have fewer openings to fight back as you run through attack combos. Through its more limited moveset, Devil May Cry games ask you to closely examine each individual technique and chain together actions carefully in order to maximize damage. Just like how Bayonetta 1 is a more difficult game than Bayonetta 2, Devil May Cry games are more difficult than Bayonetta as a result, because they demand more mastery over each skill. It makes for an interesting case study in mainstream accessibility, as you can trace a lineage of these games getting less technical over time. Especially given that, in a post-Bayonetta world, Devil May Cry also began moving towards having a more accessible difficulty. 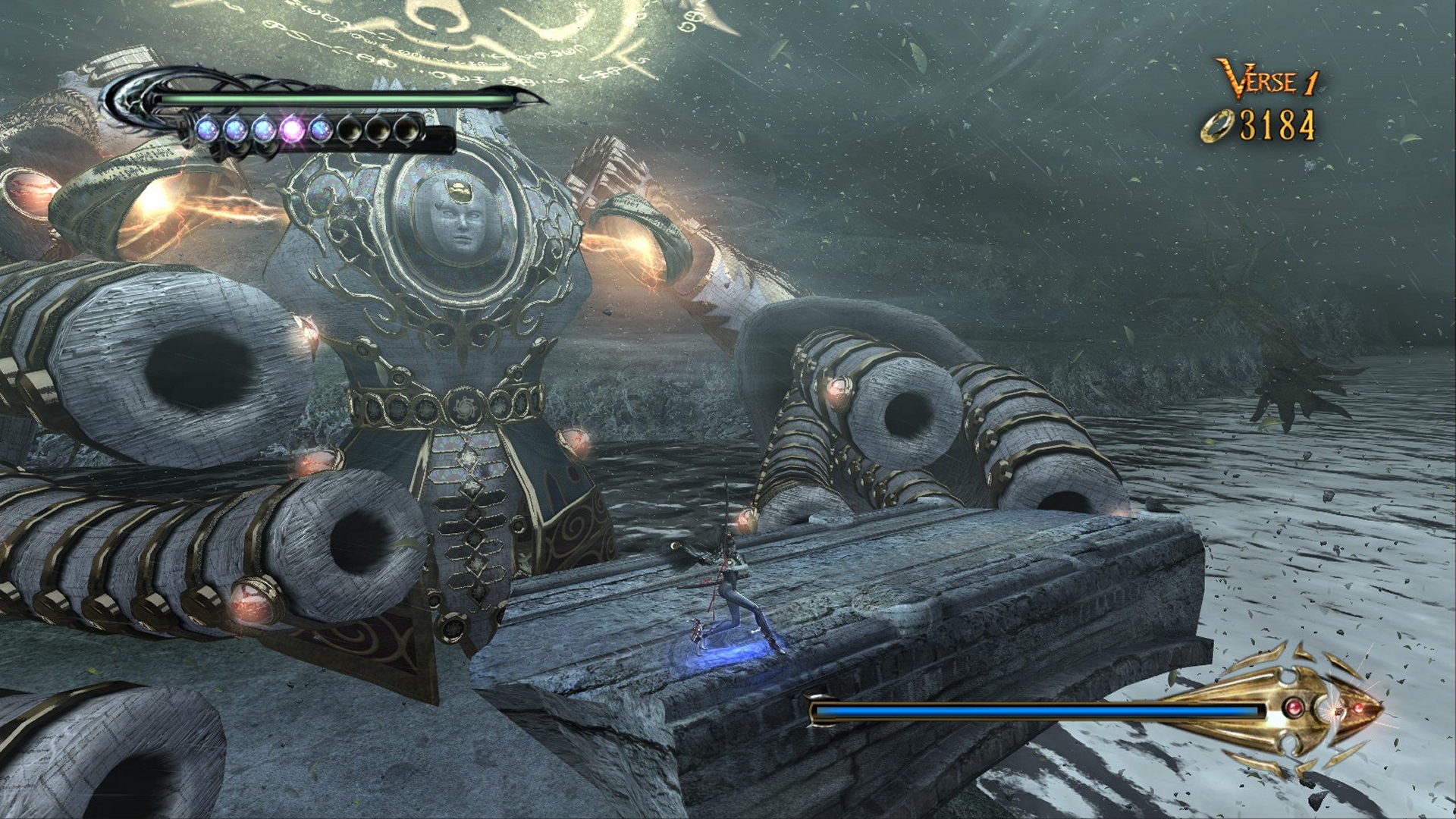 The bigger they are, the harder they fall.

One area where the original Bayonetta definitely shines over its sequel is in spectacle. Enemies in Bayonetta are huge, and fights only get bigger and more impressive as you progress through the game. Eventually, you’re fighting creatures that are hundreds of feet tall, and it doesn’t stop there. In true Platinum style, Bayonetta is a game that is constantly trying to outdo itself; just when you think it couldn’t go any further, when you think this time you’ve finally reached the game’s last challenge, it still has more for you. Even after the credits finally, FINALLY roll, more modes, more costumes, and more stuff continues to unlock.

Some of this is to Bayonetta’s detriment. One might describe the back third of the game as a series of boss rushes. Bayonetta essentially reaches a saturation point, and after hours of constantly being given new toys to play with and new enemies to use them on, that slows way, way down. The game devolves into making you fight more difficult versions of the things you’ve already been fighting for hours, and by this point I start to burn out on the game. Admittedly, fighting is the core hook of why you’re playing to begin with, and it’s asking you to demonstrate a mastery of everything it has taught you, but it does mean that I like to start Bayonetta more often than I finish it.

Another dramatic difference going from Bayonetta 2 back to the original is the visuals. Bayonetta 2 is an incredibly colorful game, with blazing hot pinks, deep purples, and cool blues. Returning to Bayonetta 1, it’s striking just how washed out this game’s color palette is. Though you may get a splash of orange or red here or there, most of the game deals in drab greys and browns. Now, to be fair, Bayonetta was originally released in 2009 — and heavy color correction was in vogue back then. Consider contemporaries like Fallout 3, Grand Theft Auto 4, and Resident Evil 5, to name a few. Many of them feature the same washed out colors. I don’t necessarily think this is something that could be easily “fixed” without totally redoing the game’s entire aesthetic, it’s just a big signifier of the era Bayonetta was released in.

Despite some minor rough edges, ten years on, Bayonetta is still among the pinnacle this genre has to offer. The highs are so high that they exceed most of the lows, easily putting Bayonetta on the shortlist of Platinum’s best games. It also plays well on the Playstation 4, too — though the claim is that this “10th Anniversary” version hits 4K, 60fps, I wasn’t able to test that, but I will say that it looks nearly indistinguishable from the PC version at 1080p with all of the settings maxed out. What this all means is that if you still haven’t played Bayonetta yet, there’s never been a better time.

Bayonetta is near perfect.