Dated in all the wrong ways

Back in their heyday, Sega sometimes felt like they were thinking at least two steps ahead of the game industry. This was both their greatest strength and one of their worst weaknesses. I mean, Sega tried to run their own ISP called SegaNet for the Dreamcast’s online functionality, which itself was an extension of the Sega Saturn Netlink’s online functionality. That was nearly a decade before the launch of services like Xbox Live. When people say a company was ahead of their time, Sega could be further ahead of even those guys, to the point where nobody knew what to do with their ideas.

Such was the case with games like NiGHTS into Dreams, Samba De Amigo, and the game we’re here to talk about today, Panzer Dragoon. Now, Panzer Dragoon wasn’t a failure. If anything, it was the closest thing the Sega Saturn had to a flagship franchise, with three games on that platform. In 1995, nobody was making games that looked or sounded like Panzer Dragoon, and it would be many, many years until the rest of the industry caught up to that.

In the modern context, Panzer Dragoon feels the most like a Team Ico game to me. Now, I realize that surface-level comparisons like these are reductive, and both are still unique in their own right, but it’s that kind of high-art, bespoke fantasy, more of a feeling than anything else. Something that’s medieval, but thoroughly alien. I get very similar vibes from Panzer Dragoon that I get from games like Shadow of the Colossus or The Last Guardian. Certainly not in content, but in the feeling and emotion of these worlds. But Panzer Dragoon predates any Team Ico release by nearly six years. That’s what I mean when I say Sega games were ahead of their time: it was ages before anyone hit on anything that invoked similar feelings to Panzer Dragoon, and ages more before games of that type were truly appreciated. 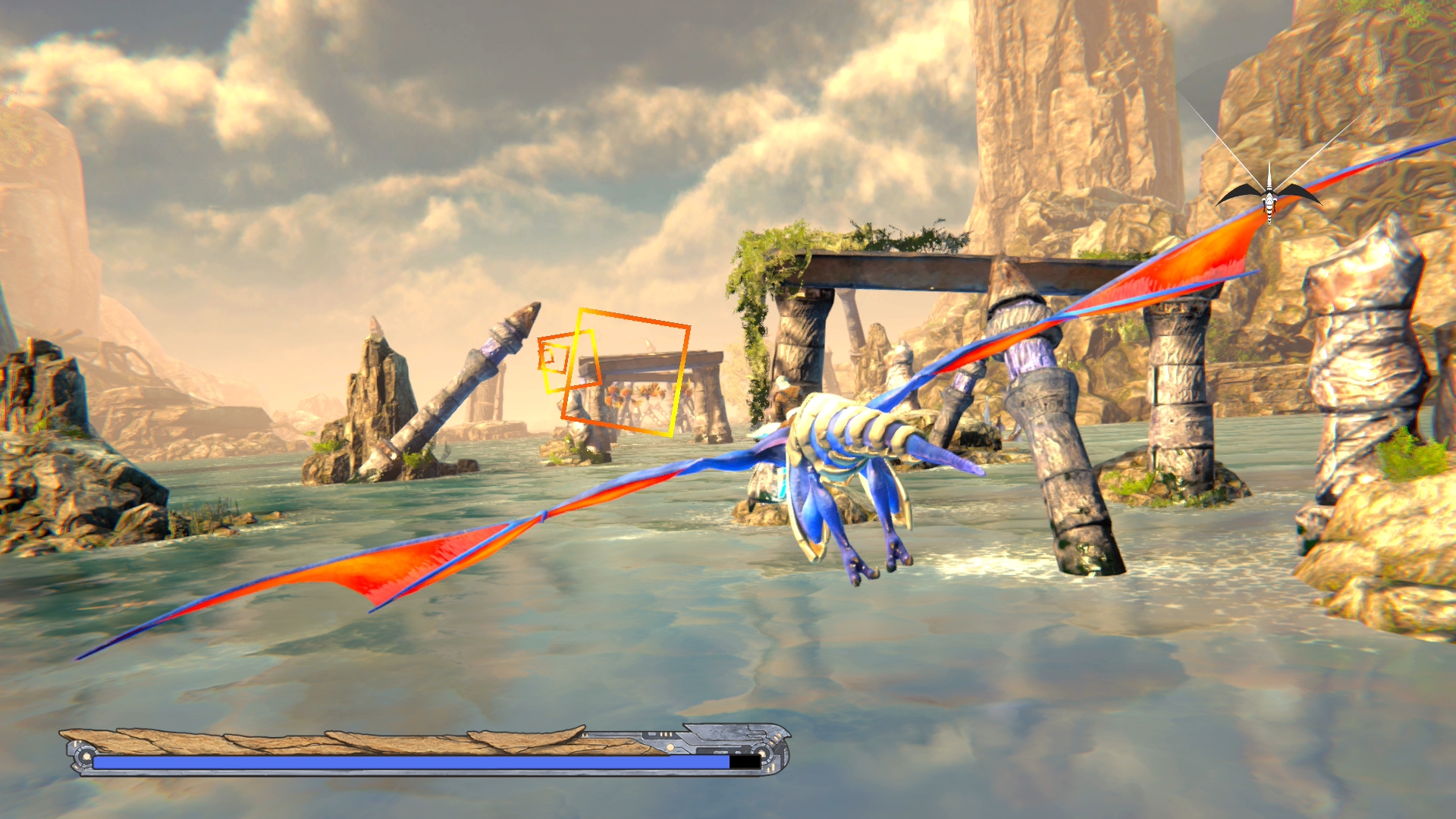 It’s been a while since the last Panzer Dragoon.

As such, there hasn’t been a Panzer Dragoon game in quite a few years. The fourth and final game, Panzer Dragoon Orta, hit the original Xbox in 2003, and since then, the series has remained dormant. A spiritual successor featuring some Panzer Dragoon development staff emerged in 2013, under the name “Crimson Dragon”, but it was unfortunately shackled to the fumbled launch of the Xbox One — featuring unwanted microtransactions and clumsy Kinect integration (both eventually made optional). Its failure seemed to have dragged down the potential of a true Panzer Dragoon revival along with it.

That makes for a curious case on why a Panzer Dragoon Remake is surfacing on the Nintendo Switch now, of all times. You could say that remakes are in vogue, I guess — but Final Fantasy and Resident Evil are long-running franchises still seeing new entries. Revisiting their greatest hits makes financial sense. Going back to Panzer Dragoon out of the blue, apropos of nothing, definitely makes for a raised eyebrow.

Since it’s been so long, you’d be forgiven for playing Panzer Dragoon Remake and thinking this is the way these games play. That was the case for me — upon booting it up, I was under the impression that this is just what Panzer Dragoon was always like. But during the course of this review, I also went back to the Saturn version of the original Panzer Dragoon, as well as my Xbox copy of Panzer Dragoon Orta, and after a few hours with those games (particularly Orta) it made for a pretty stark contrast.

So what actually is Panzer Dragoon? Its genre is a “rail shooter,” something that has fallen by the wayside in recent years. You are essentially locked down to a track, flying through an automated pathway, shooting things as they come into view. The most famous example of rail shooters are the original Star Fox games on SNES and Nintendo 64. Panzer Dragoon was viewed sort of as Sega’s answer to Star Fox, and its primary innovation to the formula is the ability to pan the camera 360 degrees around your ship (the dragon) and shoot in all directions. Whereas Star Fox mainly dealt with enemies directly in front of you, in Panzer Dragoon, enemies could come up from the sides or even behind you, and a simple radar helped keep tabs on what enemies were where. 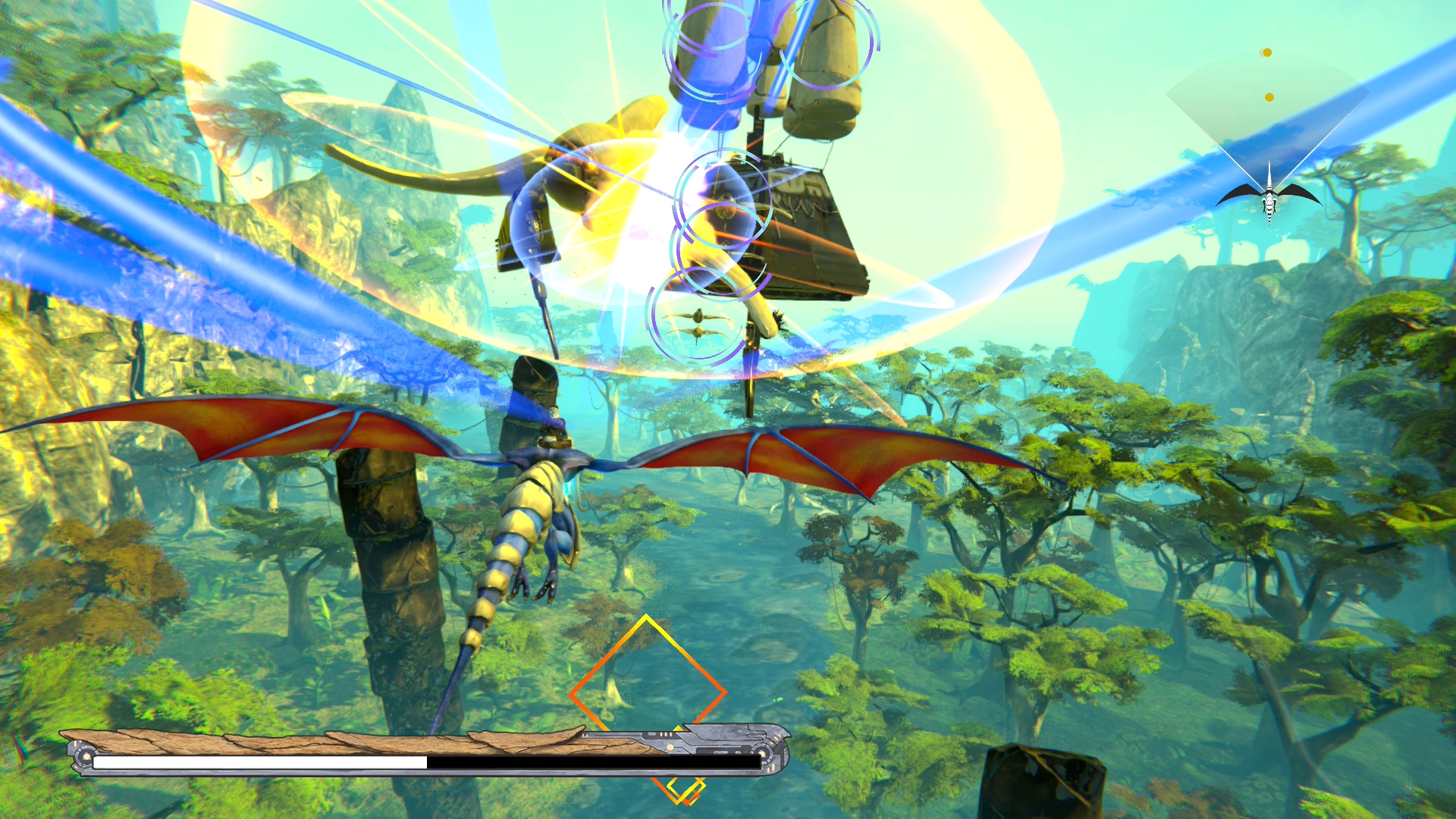 Rail shooters have fallen out of favor as open world games gained popularity.

The same issues plague Panzer Dragoon that are present in most rail shooters — namely the fact that it’s both linear and short. Even Star Fox, which incentivizes replay value by offering different routes through the game, doesn’t last for more than three or four hours. Panzer Dragoon doesn’t do anything like that, meaning you’ll see the credits roll after less than two hours of play, with limited reasons to go back through a second time.

Panzer Dragoon Remake does little to add any new replay value, either. In fact, it’s hard to even consider this worthy of the “remake” title whatsoever, given it sticks religiously close to the 1995 Sega Saturn game. Not that I’d want them to add new content without the input of the original development team — just that this game feels more like the kind of $10 remaster you’d find on Xbox Live Arcade circa 2009. That’s true in more ways than one; it’s also the kind of remaster that promises pretty new visuals, but fails to understand the core nuances of gameplay.

The first thing I noticed was how Remake handles the camera. Despite greater image clarity thanks to the higher resolution, modern displays, Panzer Dragoon Remake pulls in the camera way closer to your character. In the Saturn version, your dragon took up maybe 10-15% of the screen. In Remake, what feels like half screen can be occupied by your dragon’s body and its giant, flapping wings. More often than not, I have no idea what is in front of me, because it’s being obscured behind the dragon, the wings, or the reticle.

This can be adjusted, but not in a way that makes sense. Normally in Panzer Dragoon, you adjust the camera using the bumpers. You push the right bumper to rotate the camera 90 degrees to the right, and vice versa. That’s still true in Remake, but now you can also move the right analog stick up and down to adjust the camera’s distance. And, uh, only the distance. Despite it making logical sense to aim 360 degrees around the dragon on the right stick, your only inputs are to zoom in and out of the action. Plus, even when zoomed out as far as the game will allow, the camera is still closer than the Saturn version ever was, leaving important details hidden.

A brand-new “Modern” aiming mode is included, but it’s disabled by default and with good reason. “Classic” aiming mode is exactly like it was on the Saturn — the left stick controls moving and aiming simultaneously. In Modern mode, you move the dragon with the left stick, and aim with the right. In theory, this makes you far more maneuverable, as you can dodge out of the way of incoming shots without sacrificing aim. The issue is that you still have to use the left and right bumpers to rotate your view, on top of the shoot button getting remapped to the triggers. I found it to be difficult to get used to. Maybe with enough practice, but nothing about it felt natural in any capacity. I’m not a diehard Panzer Dragoon fanboy by any measure, so I don’t necessarily believe this game HAS to control exactly like it does on the Saturn, but there should be better, less complicated ways of handling this. I ended up leaving it in “Classic” mode.

Of course, aiming in general could feel better, too. When rotating the camera around your dragon in the Saturn version, there was a bit of momentum to it, and you could tap the button multiple times to build up speed for bigger, faster turns. That functionality has been lost in Panzer Dragoon Remake, replaced with a strange, arbitrary delay between pushing the button and the game actually responding to your input. This effectively kills the ability to double tap for a quick 180, as you must wait for one, slow 90 degree turn to resolve before you can push the button again. In a game about dealing with threats coming from all directions, the Remake feels incredibly clumsy. 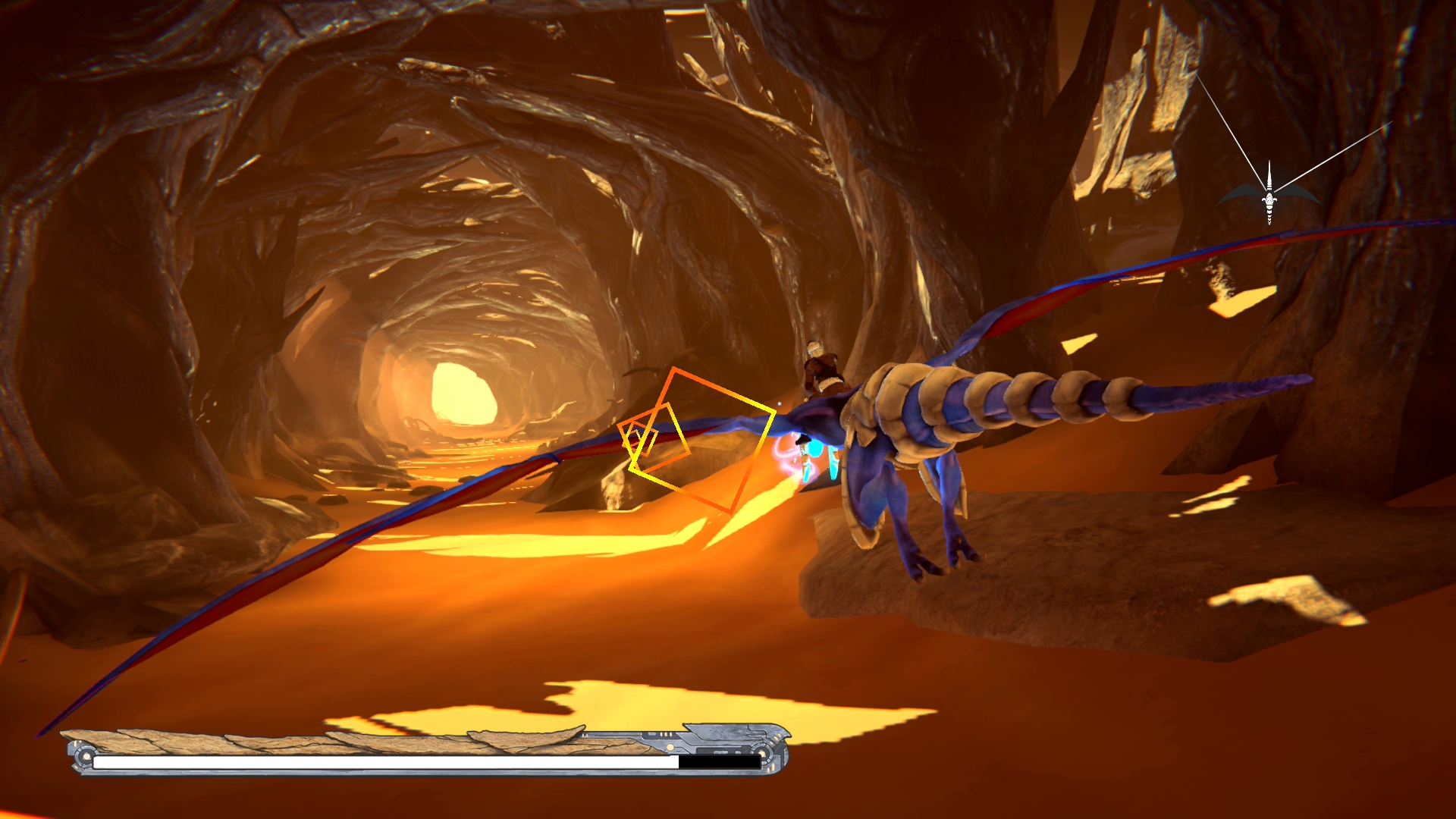 Liberties were taken with re-imagining the game’s art direction, but they’re not so bad.

If we’re being honest, I didn’t actually have high hopes going into Panzer Dragoon Remake. Early preview footage bothered me, showing a game that was so dense with detail that I thought it lacked clarity. There was too much contrast and noise, making it difficult to parse out enemies. Of course, art direction is something that’s generally pretty subjective. Beauty is in the eye of the beholder, and all that. The final release of Panzer Dragoon Remake does seem to have made changes to ease the readability of environments. Enemies are also brighter and easier to see, as is your dragon. Textures have also been softened for easier visibility. Though I have a feeling that may be more of a concession made for the Switch hardware, given the final game can have problems with framerate, a low draw distance, and jagged shadow rendering. It’s not an ugly game, but it’s not an especially beautiful game, either.

There’s also the issue of animation. Panzer Dragoon Remake redoes all the original game’s cutscenes in high-def. Though they look okay in stills, seeing them in motion is another story, thanks to poorly directed camera work, stiff movements, and lousy audio mixing. The original Panzer Dragoon’s cutscenes weren’t exactly cinematic masterpieces in their own right, but the Remake cutscenes are still bad, just now in different ways. We may not have to deal with ultra-compressed postage-stamp-sized video, but now characters glide across the floor as if they are ice skating, and rival dragons spiral into the sky like a Windows 95 screensaver when defeated. The iconic and alien Panzer Dragoon language is barely audible over music and sound effects. It is amateur hour.

Simply put, a lot of this Remake is a bummer, and the problems only get worse once you go back and play the original games that inspired it. After spending an afternoon with Panzer Dragoon Orta on the Xbox, a 17 year old game, I was surprised by how smooth and intuitive aiming felt, even automatically tracking enemies in 360 degrees. Booting the Remake back up the next day to take screenshots for this review, it was shocking how stiff, awkward, and slow everything about it is. You just can’t see what you’re aiming at, either because the camera is pulled in too close, or because the rotation controls aren’t responding in a way that feels natural. It’s kind of a nightmare. 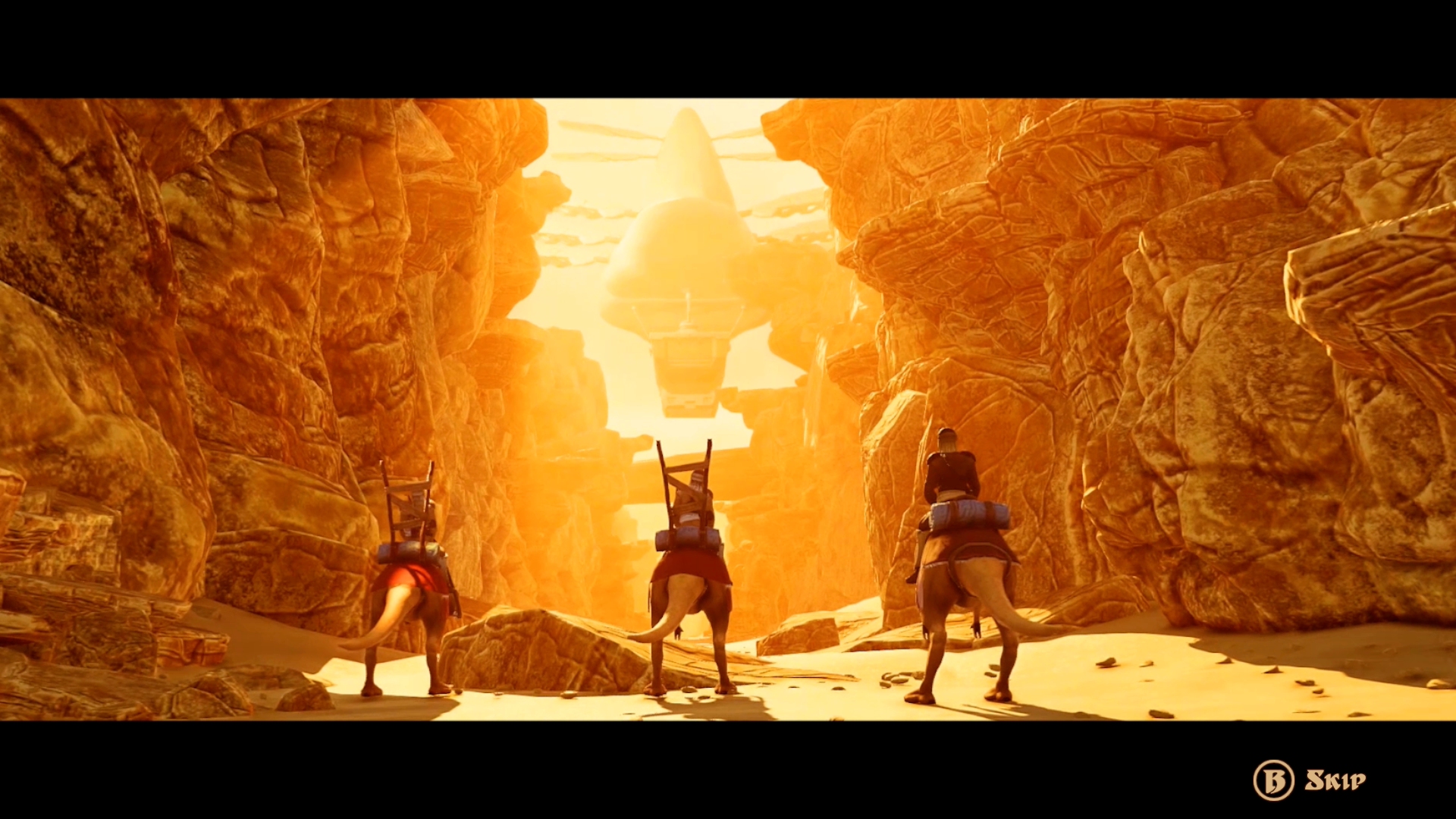 It’s a shame, because after giving it some thought, for a developer to make it this far on a remaster must have meant they are fans of the series. As I said earlier, Panzer Dragoon is effectively a dead franchise at this point. Attempting to revive it now says something about the people working on the project. Sadly, that kind of passion doesn’t always translate; in a lot of ways, this almost feels like a Panzer Dragoon fangame — good enough, but it just doesn’t pass the mustard when it comes to representing the little details. That’s fine for a piece of freeware, but on a paid product, we should (and I do) expect a higher quality than this. At its $25 launch price, for a game this short, with this many undercooked elements, it just feels like a bridge too far.

Final Score
2out of 5

The one thing I was worried about turned out not to be a problem... it's just everything else.